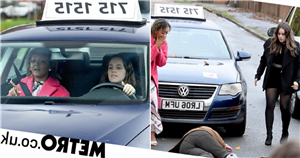 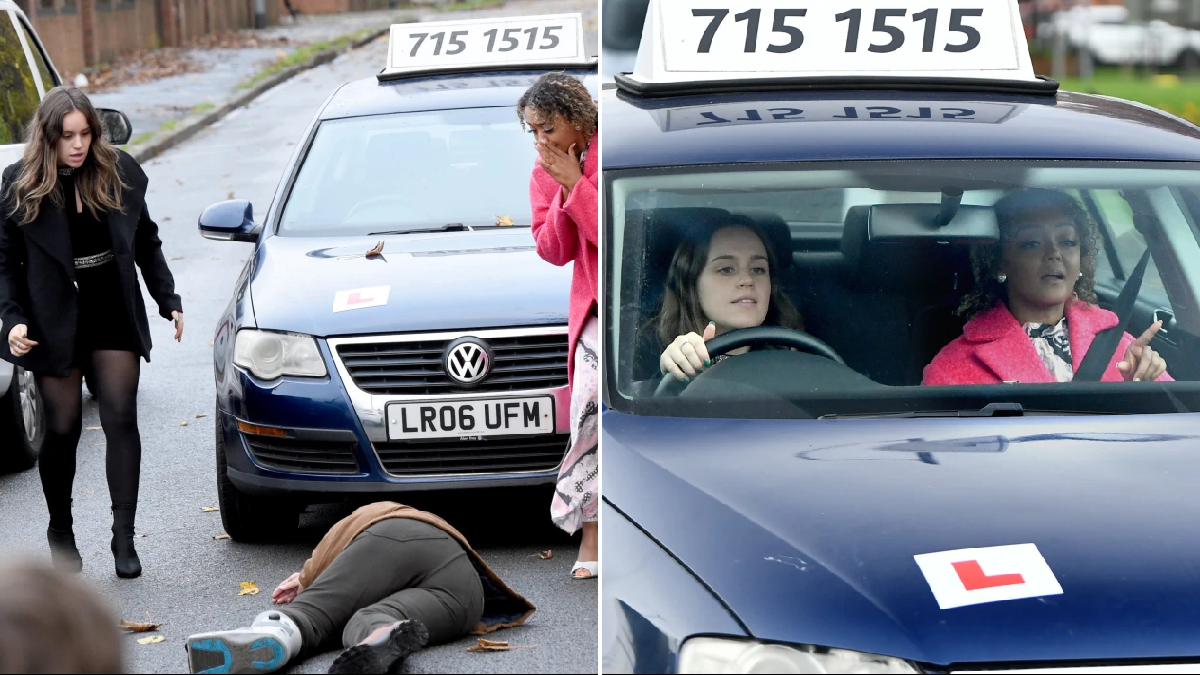 She has only just got out of prison but Faye Windass (Ellie Leach) could be heading straight back behind bars in Coronation Street as she runs over an old man during a driving lesson.

But will he die?

Ellie and Alexandra Mardell, who plays Emma Brooker, have been filming scenes on location.

So Emma decides to start giving her driving lessons in the cab, to give her something to focus on.

But disaster strikes when she is distracted and she hits an old man who is crossing the road with his shopping.

As Faye and Emma rush to his aid, how bad is it?

And with Faye on probation, she could be heading right back inside.

Veteran comedian Duggie Brown will play the old man in a cameo role but it doesn’t seem like he will be cracking many jokes – just bones.

The storyline was teased recently when an ITV preview read: ‘Affairs of the heart, faces from the past, secrets and family dramas look set to brighten up the dark winter nights for Corrie fans.

‘After the dramatic events of 2021 you would think the residents of Britain’s favourite street would be looking for a quieter start to 2022, but although the storm clouds gathering this time are metaphorical, there may be just as much damage.

‘Secrets and lies seem to follow Steve McDonald’s other daughter Emma around but, when she and Faye make a terrible mistake, this time it is Emma who agrees to keep tight-lipped about what they have done.’

So does this indicate that they could flee the scene of the crime?

Or might Emma claim that she was behind the wheel in order to save Faye’s skin?

Speaking about Faye’s return, Sue Devaney, who plays Debbie Webster, recently explained to Metro.co.uk: ‘I think she wants to give Faye a job again and help her back to normal and I think she thinks she is doing the right thing.

‘But the memories that Faye has. Debbie is caring but she doesn’t like to show it. She likes to look after folk but she is scared of letting anybody in.

‘With Faye, she wants to make sure she is all right because she feels partly responsible.’

It’s just one of many stories coming up next year on the Street.

A spokesperson for ITV teased: ‘Sarah and Adam are hoping to cement their relationship by starting a family, but when Sarah’s new friend Lydia turns out to be someone from Adam’s past, could all Sarah’s dreams turn to nightmares?

‘A familiar face is also causing problems for Zeedan when ex wife Marrium arrives on the cobbles wanting answers.

‘David Platt and Chesney Brown find that parenting can cause problems whatever your child’s age.

‘Meanwhile, Steve McDonald is shocked when he discovers the identity of Amy’s new boyfriend.

‘Tim Metcalfe should know better than to keep secrets from wife Sally, but since when has Tim ever done the right thing?

‘A health scare has him reeling, but how will Sally feel when she is the last person to know?’

It seems like it’s not just Faye who is facing a disastrous start to 2022.