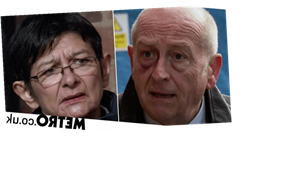 In the culmination of one of the most dramatic storylines of the year, Yasmeen was cleared of the attempted murder of her manipulative husband Geoff Metcalfe (Ian Bartholomew).

It means that Yasmeen will now return to Weatherfield, with her time in prison at an end.

The result came after Geoff’s story began to unravel, admitting that he had visited the mental health ward at the hospital after first denying it.

He also hit out at Yasmeen from the dock in gripping scenes, saying: ‘I made her take a cold, hard look at herself in the mirror, and she didn’t like the pathetic excuse for a woman that she saw.’

Viewers were delighted to hear the result announced on the show, sharing their joy after she was found not guilty in emotional scenes.

‘I’m not ashamed to admit I burst into tears when the judge told Yasmeen she could go free,’ one wrote.

‘Justice for Yasmeen!’ another said.

Things ramped up last Friday, when viewers learned that Elaine had grown strong enough to tell the courts what her life was like being abused by Geoff.

In tense scenes, she told them that Geoff even told her if she didn’t leave the family, he would kill their son Tim (Joe Duttine).

Actress Shelley King has confirmed that her character will be forever changed by what has happened to her.

Speaking to Metro.co.uk, Shelley said: ‘I think I have been given a great opportunity. The tunnel doesn’t come to an end. This trauma will affect her for the rest of her life – so I am looking forward to portraying that.

‘It would be too simplistic for her to simply be cured, whatever happens to her partner. And she is a Metcalfe, that also stays with her.’