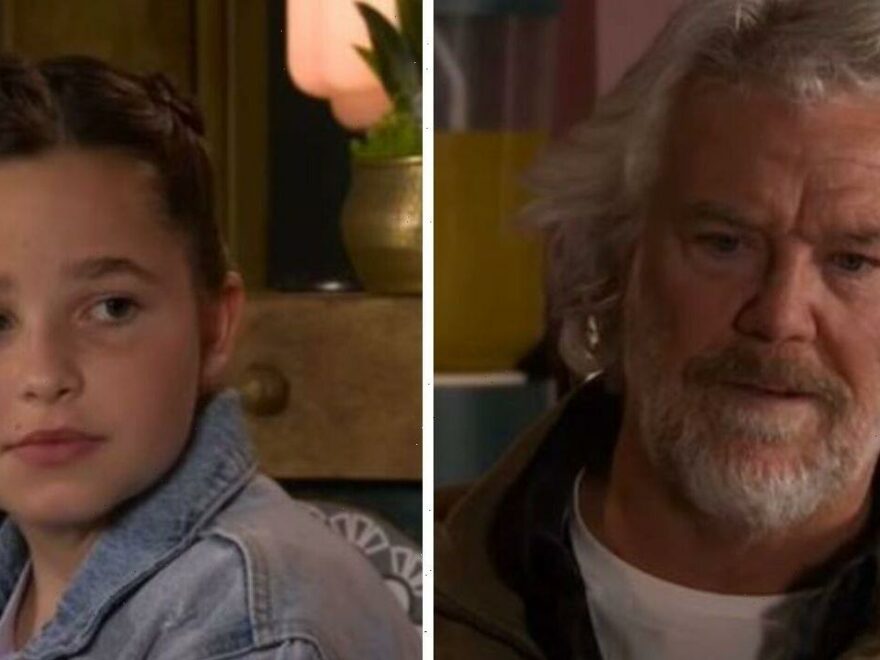 During Monday night’s instalment of the ITV soap, fans watched as Stu (Bill Fellows) came to terms with Bridget’s (Beth Vyse) recent confession. After spending 27 years behind bars for a murder he did not commit, he learnt that his daughter and her mum framed him for killing Charlie. With them both being taken in for questioning, it has left viewers wondering what will happen to his young granddaughter.

Over the past few months, residents of Coronation Street welcomed back Speed Daal chef Stu after he was released from prison.

The former homeless man was put behind bars for the murder of ex-lover Charlie Walter but maintained that he had no involvement in her death.

Yasmeen Nazir (Shelley King), Zeedan (Qasim Akhtar) and Alya Nazir (Sair Khan) went on a mission to prove his innocence after all this time and discovered he had been coerced into making a confession.

Since coming out, he was able to spend some much-missed time with his daughter Bridget and finally meet his granddaughter Eliza, much to his ex-wife’s disapproval.

Finally getting close to the 11-year-old, there was a sweet moment between them both that became too much for his daughter to handle.

Guilt-ridden, Bridget admitted to her father that it was she who killed his partner all those years ago, with her mother helping cover the crime and frame Stu.

Although he revealed he wouldn’t go to the police as he didn’t want to ruin his new relationship with his granddaughter, the situation takes a turn for the worse.

With new DNA evidence proving that Bridget must be responsible for the crime, she was later taken into questioning.

In the latest episode, Stu came to the realisation that with Bridget and his ex-wife potentially going to prison, he was the only family member that Eliza had left.

After watching the episode, many viewers took to Twitter to share their thoughts on what they think will end up with his granddaughter.

Justin Rafferty commented: “Stu will look after his granddaughter Eliza permanently because her mother Bridget is in prison.”

Shrimpsy added: “So Stu going to get loads of money for being wrongly convicted and now the girl is in their permanent care now, #Corrie”

The One Show viewers puzzled over A-Lister outfit blunder[REACTION]

Ryan Glendenning Tweeted: “Bridget has been charged with murder [sic]. Stu getting the justice he deserves it’s just a shame about Eliza.”

With Westie adding: “I’m predicting a custody storyline for Stu; say he becomes Eliza’s guardian, then Lucy gets out of jail (sentence pending) probably Xmas, she’d want Eliza back until Bridgette gets out (2023?) who then turns on Lucy & moves to the cobbles.”

On Monday night, fans saw Bridget call her father to admit that she’s pleaded guilty to the crime she committed all those years ago.

Throughout the episode, Stu aired his concerns about raising an 11-year-old but Yasmeen was on hand to reassure him that they’d be able to manage.

In the end, Bridget called the house from prison as she wanted to speak to her daughter.

With Bridget asking when she’s returning home, her mum was heard saying she was about to tell her the whole truth of the situation.

Coronation Street airs on Mondays, Wednesdays and Fridays at 8pm on ITV.