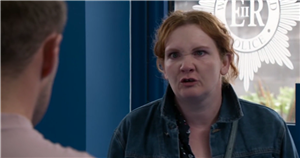 Coronation Street's Fiz Stape has been left devastated over Tyrone Dobbs reporting their daughter Hope to police and has made no effort to hide her anger.

Evelyn later encouraged Tyrone to tell the truth to police about his daughter's involvement in the fire, explaining that she might need professional help as a result of this kind of behaviour.

Taking her advice on board, the worried dad told police everything he knew and handed over the bottle of nail varnish remover that was used in the fire.

While at first the police officer in charge of the investigation didn't believe him, retrieval of the evidence swayed his mind and he later released Fiz from custody.

On her way out, Fiz gave Tyrone a piece of her mind, arguing that while she might forget about everything that's happened, their daughter won't.

Insisting that his decision had nothing to do with his girlfriend, Tyrone told Fiz: "This isn't about her, I did it because it's the right thing to do."

"I hope you're proud of yourself," Fiz replied as she continued: "Putting a vulnerable 10 year old child behind bars."

After he insisted that it "wouldn't come to that", she said: "Oh you're a legal expert now, right, hang on. What do you think they're gonna do? Put her to bed without any tea – they're going to arrest her for arson."

"Yeah well the truth was gonna come out anyway eventually. Look Fiz, I know you're scared, right. But this could turn her life around. Get her the help she needs, a fresh new start," Tyrone hit back.

However, Fiz was having none of it as she called him "deluded" and said: "You threw our whole life away for that woman…."

She added: "I'm fine, I'll get over it, I'll be okay. But Hope, what you've just done to her, that's the ultimate betrayal. I do not want you near me or the kids ever again."

Following the fire, Alina was the under the impression that she and the baby would be okay as she went to leave the hospital after being discharged by doctors.

However, just as she was about to head home, she suddenly had a sharp pain as she told medical staff that she was bleeding as they rushed her for an emergency scan.

As Alina and Tyrone nervously waited for results, the couple were told devastating news as a doctor explained that their baby boy's heart had stopped beating.

She said: "I am so sorry, but the baby's heart has stopped beating. I am so sorry Alina, you're miscarrying the baby."

For all your updates on Coronation Street, sign up to our daily OK! newsletter.