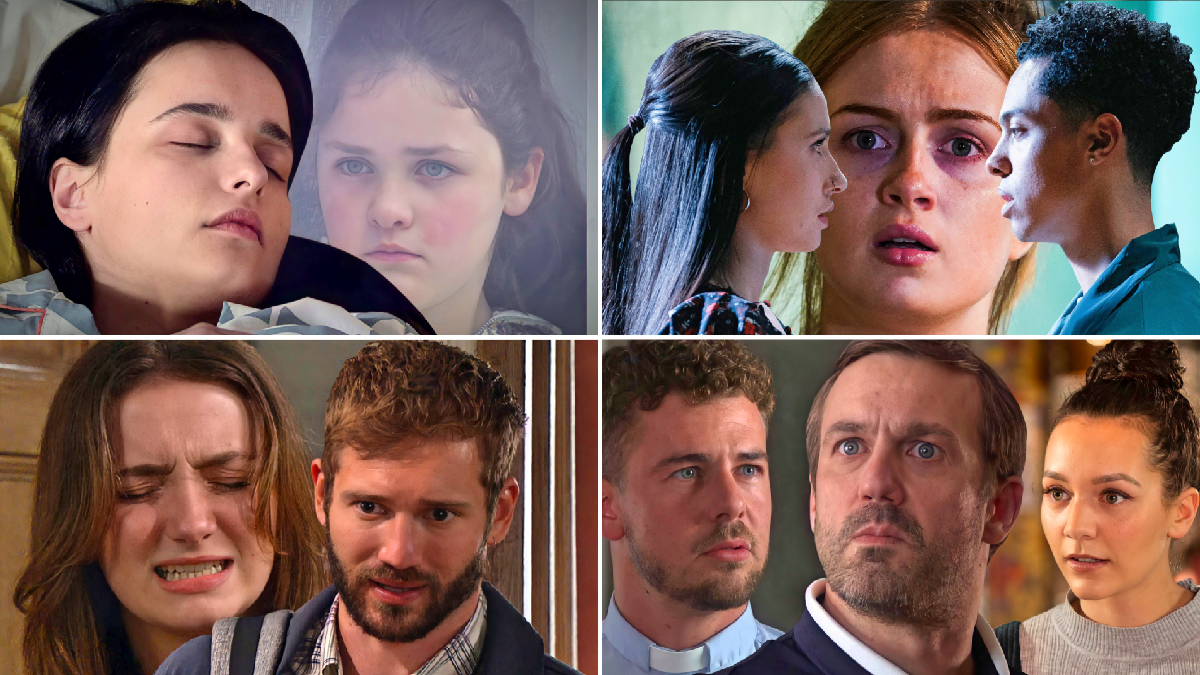 Threats are made and shocking action is taken, in what could potentially be one of soap’s most deadliest weeks to date!

But will any of our soap favourites die?

That remains to be seen, but there are a number of lives on the line, including that of Alina Pop (Ruxandra Porojnicu) and her unborn child in Coronation Street.

A shocking fire breaks out at the salon flat, and fingers are pointed, while questions are asked. In a huge twist, it appears as if vengeful Hope Stape might have had a hand to play in the atrocity, but is all as it seems?

Hollyoaks bad boy Warren Fox is hellbent on keeping his part in the Price Slice robbery under wraps, and therefore he threatens the life of Cleo McQueen in order to swear Joel Dexter to secrecy!

Gabby Thomas is left fearing the worst over in Emmerdale, when she clutches her stomach in agony, following a huge showdown with Jamie Tate (Alexander Lincoln), but is this tale set to end in tragedy?

Bernie Taylor collapses over in EastEnders, but Keegan Butcher-Baker’s (Zack Morris) head is elsewhere, as he and Dotty Cotton (Milly Zero) grow close, but will he cheat on Tiffany (Maisie Smith)?

It’s a week we recommend you don’t miss, and here’s everything you’ve got to look forward to!

Hope steals a set of Alina’s keys, and after telling Fiz she wants nothing to do with the baby, she sneaks into Alina’s flat. Alina, meanwhile, is soundly asleep, unaware of the imminent danger, as smoke creeps under her bedroom door! Eileen and Sally realise the salon flat is on fire, and call for an ambulance. Tyrone discovers what’s transpired, and sets off to the hospital. Hope watches from the window.

The cause of the fire is revealed to be an aromatherapy candle, and Alina is horrified, as she thinks she’s to blame. Hope points the finger at Alina too, claiming that as she was home alone, it must’ve been her fault. Evelyn, however, starts to piece together the truth when Hope asks if the person responsible for the blaze will get into trouble. Fiz, meanwhile, tells Hope they need to talk about the fire, but will Tyrone tells the police they think their daughter is responsible?

Michael and James are frustrated when they learn that the complaint they made isn’t being taken further. James confronts Craig on the matter, questioning if he reported the fact that he wasn’t driving erratically, leaving the young cop flustered. James subsequently relays his disappointment and Craig feels awful, questioning PC Brody about the arrest once again. Brody suggests that black people are over sensitive, which leaves Craig appalled.

Aadi tells Summer that he’d miss her if anything happened to her, and she’s touched, admitting that she feels the same about him. Flustered, he leaves and later tells Amy about his crush on Summer. Amy offers him some advice, but Tracy misconstrues the scenes, believing that Amy and Aadi are an item! Steve, much like Tracy, gets the wrong end of the stuck and launches an attack on Dev for encouraging his son to haver sex with Amy! Little does he know that Amy, Aadi and Summer have witnessed the showdown!

Kat has a rare record in her possession that she hopes will assist Billy in getting back on his feet, explaining that she used Phil’s money without him knowing. Kay subsequently plants the record, and pretends to find it. Billy cant believe his eyes, and soon enough the bids flood in! Janet, however, tells Billy she wants it. Kat finds Janet playing the record, and comes clean to him about how it was a lifeline she threw him. Matters are somewhat complicated though, when Kat finds a scratch on the record!

Nancy plans on going away on holiday with some girls she’s met, but Sharon’s not best pleased give that she’s leaving her in the lurch with no notice. Frankie is worried for her sister, and finds her drunk at the bar. One of the girls is rude to her, so Nancy intervenes, and a fight breaks out! The siblings spend the night in a police cell, which allows them the time they need to open up to one another.

Dotty confronts Vinny for telling Keegan about their night of passion. Vinny, however, reveals his true feelings for her, leaving her feeling awful. Keegan, meanwhile, picks up his wages, but Dotty offers him a drink. Tiffany attempts to get in touch with her husband, feeling awful about what’s transpired with Bernie, but Keegan ignores her calls, as things between he and Dotty heat up!

Jamie makes a huge decision, as he decides to leave the village. Before doing so, however, he heads up to Home Farm, breaks in and accesses the safe. Gabby, having heard a noise, realises someone’s in the house, and as she goes to call the police, Jamie steps out of the shadows, a bag of cash in his hand. She’s upset that he’s departing, feeling betrayed, but things take a turn, and she’s left clutching her stomach in pain! Will decides to take her to hospital, as Jamie admits he never wanted the baby.

Nicola and Jimmy decide that they’ll tell the kids they’s splitting up after Angel’s birthday party. As the party commences, however, Nicola proceeds to badmouth Mandy, which Mandy overhears! She retaliates by attacking her with a huge inflatable, and soon the two women are brawling, with birthday food flying left, right and centre!

Sarah is feeling incredibly stressed in the wake of Leanna’s death, and she’s not pleased when Faith suggests they live life on the edge. Faith books some activities up at the HOP, and Sarah invites Cain. Things take a turn, however, when Faith receives a phone call from the doctors to go in urgently. She prepares for the worst, certain she’s going to get bad news. Sarah, meanwhile, bumps into Liam at the graveyard. He reflects on Leanna’s death and how fate just decides when it’s your turn to go. Anxious Sarah rushes home where she slumps on the floor.

Joel works out that his Warren broke in to Price Slice, and orders him to come clean. A heated showdown ensues between the father and son duo, ending with Joel demanding that Warren turn himself in, or will he do it for him! Warren agrees, but later has a change of heart, as he proceeds to threaten the life of Cleo, knowing how much Joel cares for her.

Cleo is celebrating her birthday, but she’s not really in the party mood after Toby’s present doesn’t go down too well. Joel meets up with her, under the pretence of simply wanting to wish her a happy birthday, but Cleo can see right through him. The priest therefore reveals the truth, warning her about the threat on her life! One thing leads to another, and in the heat of the moment, they share a passionate kiss!

Diane has a change of heart about Scott, as extends an olive branch, but trouble is brewing once again, as she struggles to relax while Scott minds the children, leaving Tony worried. The legendary soap couple enjoy a fun night out together. That is, until Diane wakes up, evidently concerned for Eva’s safety. She rushes to find Scott asleep beside her, and she’s relieved, but when she spots a pizza box nearby, she panics. Tony decides it’s time to have a chat about Diane’s ‘excessive’ behaviour.