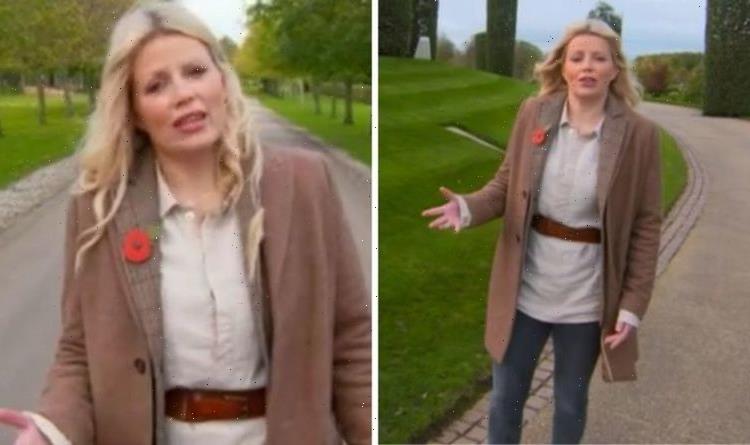 Countryfile: Widow praises The Royal British Legion for their help

Countryfile’s latest instalment aired on Remembrance Sunday. To commemorate this, Ellie Harrison was presenting her segment of the show from the National Memorial Arboretum in Staffordshire, which honours the British Armed Forces and those lost in conflicts. Ellie chatted to a widow who had sadly lost her husband after he struggled to cope when he returned from Afghanistan. Viewers tuning in were moved by the story and applauded the BBC show for including remembrance in the episode.

The 150-acre site is part of the Royal British Legion, which has supported members and veterans of the British Armed Forces for 100 years.

“I suppose we see the poppies and we think of World War One and Two,” Ellie commented, “but there have been many more conflicts, sadly, since then.”

She explained: “Sadly, since 1948, our armed forces and our allies have been involved with over 50 conflicts around the world.”

She continued: “The Royal British Legion is the UK’s largest armed forces charity – I think we’ve got over 180,000 active members and over 110,000 volunteers.

“So we’re out there in every community in the UK, making sure people in the armed forces family get the support that they need, whether that’s a friendly, listening ear when we’ve been feeling isolated, some people might need physical support or financial support or emotional support.”

A field of remembrance has been created at the Arboretum to mark the centenary of the charity, with 18,000 poppies, each paying tribute to an individual who served in the armed forces and lost their life.

Twitter user Natalie Drury commented: “#Countryfile Very fitting episode on this day if life had been different it was something I wanted to do Army.” (sic)

Tony Evans penned: “Looks like a decent episode for a change with Ellie and #RemembranceSunday commemorations #Countryfile.”

Mum-of-two Chantelle turned to the Royal British Legion following the tragic death of her husband Ryan in 2015.

In 2006, Ryan completed a six-month tour of Afghanistan and returned home later in the year.

Chantelle explained to Ellie: “As time went on, we learned a different Ryan. Things just irritated him that little bit more.

“As the years went on, he got worse. All of a sudden, in the October, he hit a brick wall.

“He couldn’t go out of the house. It was just him and four walls. Ryan kept apologising for how he was because he was really depressed.

“But you just carry on as a family. On Friday we tried to get a crisis help for him, that didn’t come.

“And on the Tuesday, my eldest phoned me and said, ‘I’ve come home and dad’s car’s here but I can’t find dad.’

“And I just knew.” Heartbreakingly, Ryan had taken his own life.

An emotional Ellie commented: “That moment changes your life forever.”

Chantelle recalled that she had nowhere to turn until someone suggested the Royal British Legion.

“Within a couple of days, they’d sent someone over to my house to help me fill out the forms, they helped me financially, they brought me my Christmas dinner in a food hamper.

“They bought me Christmas presents for the children, they’re amazing.”

Countryfile continues on Sunday at 5.30pm on BBC One.