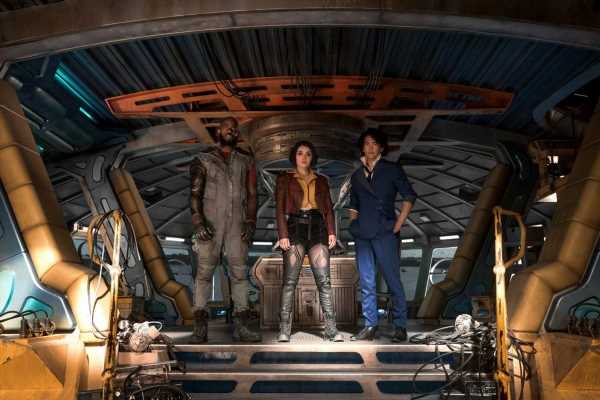 Netflix’s live-action Cowboy Bebop is drawing new fans to the science-fiction world introduced in the anime, but it’s not delivering the exact narrative covered in the original. Although the adaptation follows the same ragtag group of bounty hunters, it tweaks their present-day storylines and backstories in fairly significant ways. Those who haven’t seen Cowboy Bebop may not notice, but longtime fans will pick up on these five differences between the two tellings.

[Warning: This article contains spoilers for the anime and live-action versions of Cowboy Bebop.]

The live-action ‘Cowboy Bebop’ alters how the crew comes together

The live-action Bebop crew may have the same chemistry as the characters from the anime, but they come together in a completely different way. For one, Faye Valentine (Daniella Pineda) is introduced slightly earlier in the Netflix series. She confronts Spike Spiegel (John Cho) while attempting to collect a bounty, her entrance diverging from that of the original. Her anime counterpart shows up in Spike’s life while he’s playing blackjack, attempting to deliver him a chip and have her debts written off.

And as PopSugar points out, Faye isn’t the only main character whose first appearance is altered in the Netflix show. Ein’s introduction is also slightly different, with the data dog getting stolen in the anime by someone hoping to make a profit. The live-action series switches up the man’s motivation for stealing the dogs. It also waits before revealing that Ein isn’t just an ordinary pooch.

The live-action gives Jet Black an ex-wife and daughter

In addition to switching up the Bebop’s crew’s first run-ins, the live-action Cowboy Bebop tweaks the characters’ backstories. Most significant is probably Jet Black’s (Mustafa Shakir). Although the anime alludes to past romances, the adaptation gives him an ex-wife and a child. Not only does he see them both regularly, but his daughter Kimmie plays a fairly significant role in the new show. In fact, she’s the catalyst for the gang’s showdown with Vicious (Alex Hassell) during the season finale. She’s also the reason they wind up keeping Ein.

Spike Spiegel used to go by another name

While Jet boasts the most significant change to a backstory, the live-action Cowboy Bebop gives Spike Spiegel a new name: Fearless. With the show digging deeper into his involvement with the Red Dragon Crime Syndicate, it reveals that Spike is actually the name he took on after faking his death and leaving his old life behind. This change doesn’t make a huge difference to the main storyline. However, it draws a new parallel between Spike and Vicious.

Speaking of Vicious, Cowboy Bebop fans can expect to see way more of him in Netflix’s live-action adaptation. Although Vicious and Julia both play important roles in Spike’s story in the original Cowboy Bebop, neither gets a ton of screen time. Vicious appears for several fights, but he’s hardly a constant presence in the story. Meanwhile, Julia remains a mysterious woman from Spike’s memories until the very end of the anime.

The live-action take on the story strives to give both these characters more personality by giving them their own subplot. Their scenes show more of their relationship with one another, but they also give some insight into how the Red Dragon Crime Syndicate functions.

Leading up to the release of Netflix’s live-action Cowboy Bebop, fans questioned whether Radical Edward would make an appearance in the new show. Ed was a prominent member of the Bebop crew in the anime, and she became a fan-favorite character as well. And Ed does get a name drop early on in the adaptation, along with a single scene later on. But she’s not nearly as present as she is in the anime — and fans don’t get to see how she meets the Bebop crew.

The show is clearly setting itself up for a second outing, so it’s possible fans will get more of Radical Edward when that happens. In the meantime, they’ll have to check out the anime to see her.