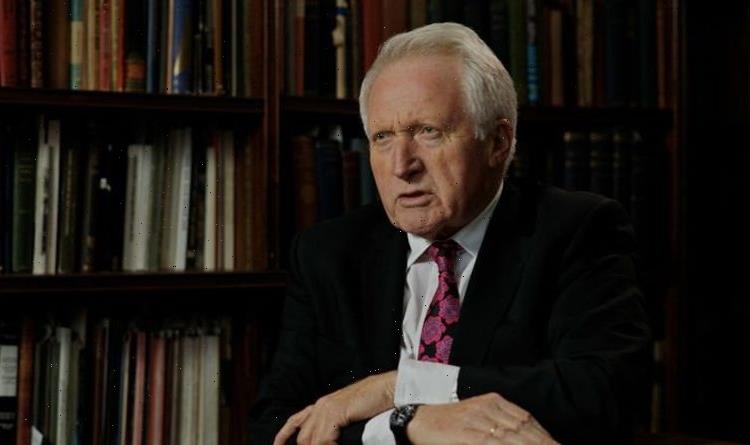 David Dimbleby remains one of the most recognisable media faces in the UK thanks to his long career at the BBC. The journalist and broadcaster was well known for hosting political programmes such as Question Time and heading up election coverage. It was during his long spell as host of Question Times that he regularly bumped into Piers Morgan. The former Good Morning Britain host wrote a diary for the Daily Mail in 2018, and revealed insight into his tense exchange with the BBC heavyweight.

Piers explained the exchange started in an argument between himself and Labour MP Dawn Butler.

“I burst out laughing. ‘It’s not remotely clear, what are you talking about?’

“I then pressed her to say if Britain should try to stay in the single market as part of the Brexit deal, a massive bone of contention among her own colleagues.

“Butler repeatedly refused to answer this very simple question, wriggling like a particularly slippery eel on a fishing hook.

“In desperation, she played the victim card: ‘Do you want me to speak or do you want to keep attacking me?’”

This, Piers says, is when host Mr Dimbleby jumped in, warning the then Good Morning Britain star to “put a sock in it”.

Piers added that Mr Dimbleby “kept muttering insults at me throughout the show.”

The host then told off Piers, saying: “All right, you’ve made your point!”

During another segment of the show Mr Dimbleby once again fumed at Piers.

The Mail columnist claimed the BBC journalist said: “Piers! can you keep quiet while she speaks, please? Thank you.”

In the final debate, Piers turned to the audience to ask them a question about paying a special tax to help save the NHS.

Mr Dimbleby then interjected again: “No, no, no! Piers, we will not have a show of hands. I don’t know what you do on your show but we do not do shows of hands on this show!”

He added: “Go back to your show. You’re not chairing this one!”

In his diary, Piers then wrote: “I’ve never seen him so enraged. Even Susanna doesn’t get that annoyed with me.”

Mr Dimbleby also appeared to be angry with Prime Minister Boris Johnson during a furious tirade in February 2020.

His conduct towards the BBC was “childish, peevish and unpleasant”, he added.

Mr Dimbleby made the comments in interview for Germany’s ARD TV channel.

“It is a way of damaging and undermining the BBC that is dangerous and should be resisted forcefully if public broadcasting is to survive. Anything that chips away at what we believe to be a good democratic process is dangerous and has to be fought against.

“It has to be explained why not speaking to people is dangerous, why not appearing on television is dangerous.”

According to the transcript, Mr Dimbleby added: “Nobody trusts Boris Johnson. Who could trust Boris Johnson? He lies everywhere to everyone. He lies to his family. He just makes it up, you know.

“‘Johnson is apeing some of the attitudes of Trump. He is a different kind of political animal, like Trump, very similar rulebook. If you are like that the one thing you don’t want is people questioning what you’re doing, which is why he won’t let his ministers go on television or any serious programme.”

The UK Government and the BBC are currently in negotiations for the licence fee, which is expected to result in a real-terms pay cut to the annual sum.