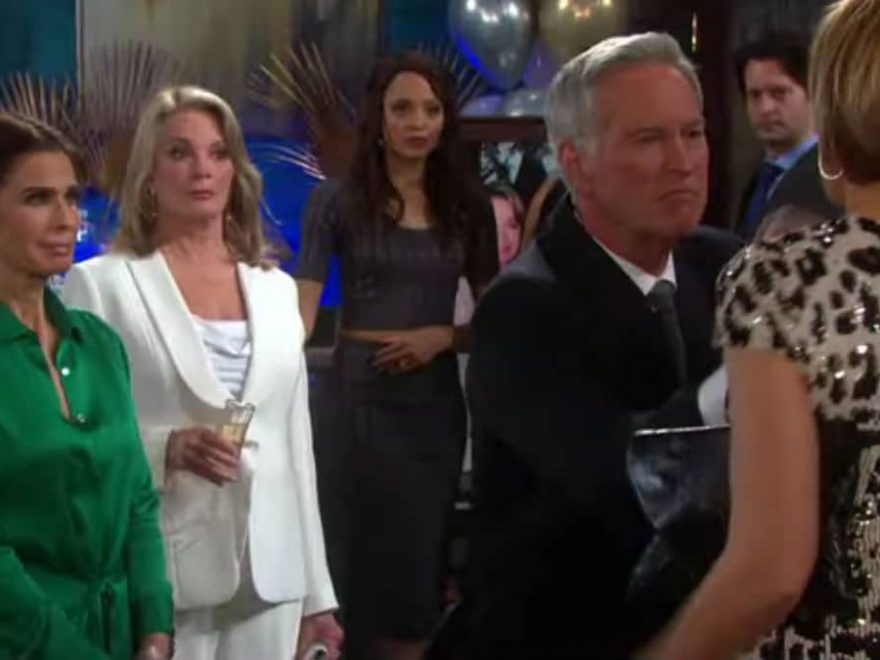 The Days of our Lives video spoiler for the upcoming week promises that nothing but trouble is afoot for your favorite Salem characters. It will be a week of mayhem, drama, and trauma that you do not want to miss!

Doug’s Place will be the hot ticket in town and the only place to be. Why? It’s Jarlena’s anniversary bash, so what could go wrong? Plenty, given that Brady (Eric Martsolf) warns Faux-cole (Arianne Zucker/Stacy Haiduk) that “this has to be a drama-free party!” She looks like a naughty child in return and later mocks someone who will be very displeased.

The happy couple walks through the doors with huge smiles and formal attire as their friends and family all yell “surprise!”

Alas, it will be an evening full of surprises, some happier than others. Anna (Leann Hunley) is most definitely not happy to see Tony (Thaao Penghlis) with Nicole which leads her to express her feelings most astonishingly.

There is a fabulous catfight, and everyone watches in shock as two mature ladies who should know better tussle and wrestle.

Hey #Jarlena fans! Got a question for your favorite #DAYS super couple? The lovely @deidrehall_official and Drake Hogestyn are going live this Friday at 6:30 pm ET/3:30 pm PT to answer them. Drop your questions in the comments below!

Stabi is hot to trot and go at it like they’re in heat. Is there any chance that Maggie (Suzanne Rogers) will throw cold water on their parade once again?

John (Drake Hogestyn) acts very ungentlemanly and grabs a woman who is not his wife! This happens in front of Marlena (Deidre Hall), who could not be more shocked, as are the other guests, especially Eric (Greg Vaughan).

Ultimately the hijinks climax as someone yells, “she’s got a gun!” Who in the world would pack heat at such a festive celebration?

The suspects are endless! Everyone looks to have beef with someone else when in fact it should be a day of bliss for Salem. Maybe they should have double-checked the guest list because there is a bombshell guest who may or may not be who you think it is.

Be sure to tune in and find out!