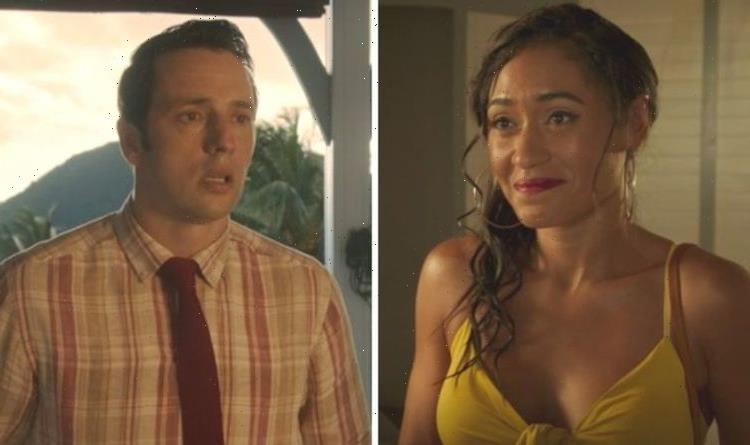 Florence Cassell (played by Josephine Jobert) made her return to Death in Paradise during season 10 of the show to take on the role of Detective Sergeant. Ever since she has been working alongside DI Neville Parker (Ralf Little) to solve a number of murder mysteries and the pair have developed quite the bond. However, season 10 ended on a cliffhanger and fans were left wondering whether Neville confessed his true feelings to Florence.

Earlier this week it was confirmed that for the first time ever, the BBC would be airing a Christmas special.

During the one-off episode, Florence will be making a temporary exit to go and visit her family for Christmas.

However, with one member of the team down, Dwayne Myers (Danny John-Jules) will be back in Saint Marie to take her place.

Since season 10 came to an end, viewers have been eagerly waiting to see how Florence and Neville’s romance plays out.

Bosses have promised “more surprises” are on the horizon for Florence and Neville in the Christmas special.

But will Florence’s temporary exit be made permanent if she ends up rejecting Neville’s advances?

The ending of season 10 saw Catherine Bordey (Élizabeth Bourgine) urging Neville to finally admit his feelings for Florence and he finally plucked up the courage to go to her house.

However, Florence was getting ready for a date with an old school friend when Neville knocked on the door.

The final scene teased he was finally about to tell her his feelings as he said: “What I wanted to say was…”

Ralf has also teased fans about the upcoming storyline as during a cast Q&A attended by Express.co.uk back in December.

Speaking about the budding romance, the actor teased: “He is absolutely enchanted by this very beautiful, very charming, charismatic, warm and generous character.

“And, you know, he finds himself very much drawn to her. Where that will go in the series and in future series is anybody’s guess but yes, he’s certainly very taken with her.”

He added: “Those two have a real connection in this series and hopefully we’ll get to see where that goes.

“He hasn’t managed to actually do anything about it yet, but we’ll see.”

Danny, who left Death in Paradise after season seven said he can’t wait to make a return as Dwayne.

The former Strictly Come Dancing star said: “It’s always a pleasure going back to the Caribbean. And after four years away, fitting back into the fold should be seamless as I know all the new leading cast members already.”

He continued: “I look forward to bringing Dwayne and this tenth-anniversary special script to life.”

“We’ve been talking about a Death in Paradise Christmas episode for years,” Tim Keys the boss of the programme added.

“So, we’re beyond excited to be finally making one and to be working with Danny again.

“We can’t think of a better place to spend Christmas than in Saint Marie – it’s still part of our tenth anniversary year after all!”

Death in Paradise is available to watch on BBC iPlayer.