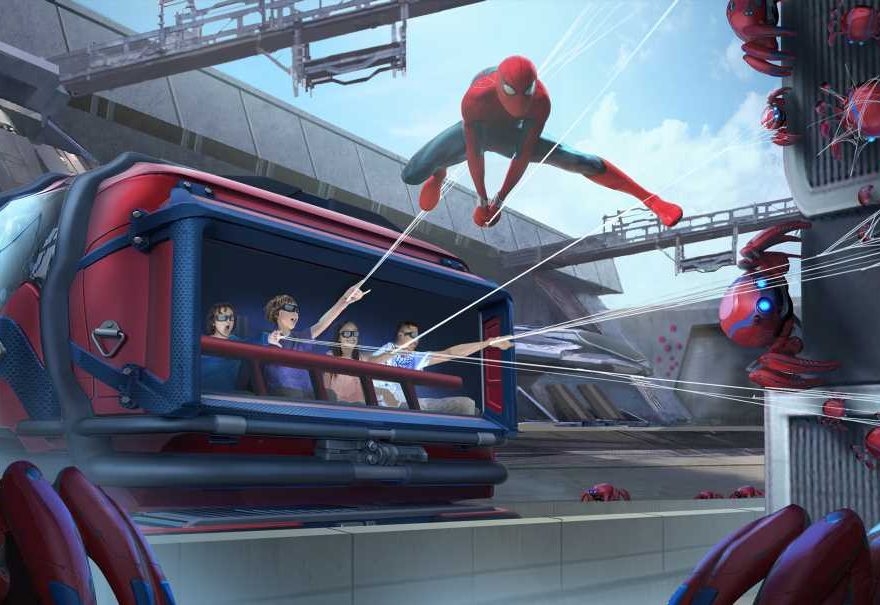 Disney has revealed further details about its ambitious new Marvel theme park expansions heading to Disneyland’s California Adventure and Disneyland Paris in the coming years. Led by segment chairman Bob Chapek, the formal Parks, Experiences, and Products presentation at the company’s biennial D23 Expo on Sunday took the crowd on a brief tour of Disney’s plans for bulking up their Marvel theme park representation (in addition to a discussion of other detailed plans for Star Wars starship hotel, a Moana attraction, Mickey Mouse and Ratatouille rides, and more).

Post-Endgame, the Avengers will finally lay claim to a dedicated piece of theme-park property with the addition of the Avengers Campus at California Adventure and Disneyland Paris. Chapek and Imagineering creative executive Scot Drake teased that the two campuses share an interconnected story involving recruitment of new Avengers.

“We know the Avengers originally assembled when Nick Fury had the idea to bring together a group of remarkable people to protect Earth, and for years they defended us,” said Drake. “Now they’re inviting all of us for the first time to join their ranks. In some ways, these campuses are like the Avengers themselves: a group of diverse individuals who have teamed up for the same purpose. This collection of unique addresses, each dedicated to a different discipline, have been brought together to champion the next generation of heroes.”

One of the first campus highlights is the Worldwide Engineering Brigade—or WEB, for short. Disney’s first-ever Spider-Man-themed ride is set during an open house of an organization for young genius inventors (of which Peter Parker is, of course, a definitive member). The ride begins when the kids’ spider-bots start glitching and replicating and escape to the campus, whereupon Spider-Man enlists parkgoers to hop onboard a WEB Slinger vehicle and sling webs themselves to catch the miscreant bots.

Elsewhere on the Campus, Chapek and Drake teased the explorable ruins of a “California sanctum” featuring Doctor Strange, as well as an Ant-Man-themed restaurant called Pym Test Kitchen featuring oversized and shrunken foods.

Chapek also announced a new flagship ride specifically for phase two of the California Adventure campus expansion: A highly interactive Avengers ride—“one where we all have to step up, suit up, and team up”—all set in Black Panther’s Wakanda. The ride allows guests to board a Quinjet and fly to the fictional African kingdom, whereupon they engage in an immersive battle “against one of the most powerful villains they have ever faced.”

“To create something of this magnitude, our Imagineers are hard at work conceiving an all-new innovative ride system to put you in the middle of the action,” said Chapek. Concept art takes it one step further, suggesting that riders’ vehicle seats will also serve as their war machines when the simulated battle takes off.

In Paris, the Disney Hotel New York will get an “Art of Marvel” makeover that celebrates the comic powerhouse’s 80-year history. More than 300 curated works of art will be featured throughout the hotel, with themed suites (such as a red-and-blue Spider-Man suite) and common areas will keep things colorful around the building.

And finally, at Epcot, the space misfits will get another theme-park attraction with a spinning, “storytelling” indoor roller-coaster in 2021 titled Guardians of the Galaxy: Cosmic Rewind. It will feature the park’s first-ever “reverse launch into space” and expand outside its walls to host an Otherworlds Showcase that blends Epcot’s traditional educational edge with the Guardians’ fictional cosmos. (California, meanwhile, continues to enjoy the fruits of the bittersweet Tower of Terror makeover that made way for Guardians of the Galaxy at California Adventure.)

Phase one of Disney’s Avengers Campus opens in Anaheim next year.