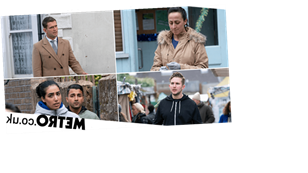 Kush Kazemi (Davood Ghadami) finds his options running out as a new year gets underway in EastEnders and as he takes desperate action and kidnaps Arthur, Ruby Allen (Louisa Lytton) might be his only key out. But she stands to lose a loy.

Stacey turns on Ruby as her worry for Kush worsens while Martin sticks up for Ruby. Stacey is terrified when Kush tells her if she calls the police, she will never see Arthur again. Later, Kush makes a call to try and solve his problem.

Callum’s luck if running out as Jack delivers some bad news. Is Ben about to discover the truth as Jack tells Callum his hands are tied?

Ash checks in on Sonia but Sonia rushes off, shaken. Later, Sonia snaps after an insensitive comment and crumbles into tears.

Jack sets a plan in motion and uses an issue to his advantage – in more ways than one. He also gets some good news for Denise and sparks fly – but they are being watched.

Stacey is in for a big surprise and Ruby is left in shocked and has some explaining to do to Martin.

Sonia snaps yet again at Jay after a difficult day, Ash reminds her that it’s important to look after herself.

Ruby makes a huge admission to try and keep Martin close. Gray tells Karen he wants the kids back for good.

Sonia and Martin share their separate woes with one another.

Meanwhile, Ben is in a tricky situation at the police station, Linda doubts her decision while there’s a new shock in store for Denise.