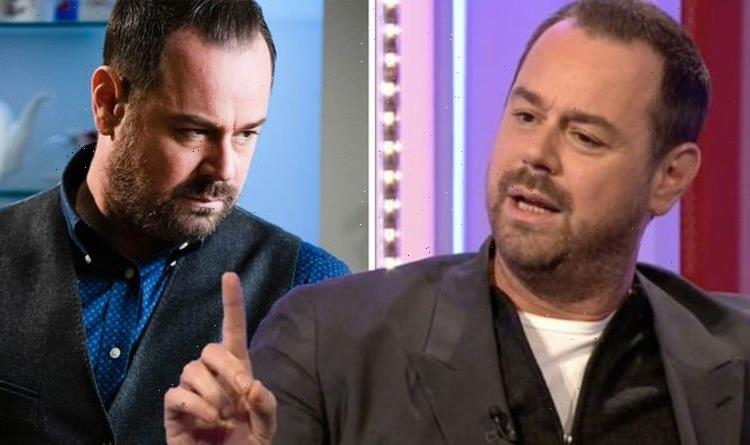 Over the weekend the BBC confirmed Danny Dyer will be leaving his role on EastEnders. The actor, who plays Mick Carter on the long-running soap, first joined the cast in 2013, but has decided not to renew his contract when it comes to an end later this year. After the news broke, rumours began speculating about why Danny was leaving the iconic show. The actor has since addressed the reports on his podcast Sorted with the Dyers.

While chatting on his podcast, Danny confirmed he’d soon be leaving the BBC soap.

However, he was quick to address rumours he’d “fallen out” with the BBC and EastEnders production team.

Danny denied the claims and insisted he’s had an “amazing” time on the iconic soap over the years.

He said: “I am very lucky, I’m very grateful that when you are in a soap your contract comes up for renewal and every time my contract has come up they’ve asked me to stay.

“I am very grateful for that because I’ve seen a lot of people come and go and it’s very tough.

“So, I always debate whether I want to sign again and I’ve been contemplating for a while now, and I decided that maybe it’s time to roll the dice and take the leap,” the actor explained.

Danny went on to dismiss reports he’d been “poached” from the BBC by rival broadcaster Sky.

He remarked: “I’ve not been poached by anybody, that’s not true at all. I’ve just decided not to renew my contract, that’s all.

“It’s not because I’ve fallen out with anybody, I love everybody there and that job has been amazing for me and it’s an important part of television.

“I’m grateful for the beautiful years I had there. It’s me taking a risk, of course.

“I know there will be some people f***ing jumping for joy at the thought of me leaving Eastenders, there will be others that are upset and disappointed and other people who will wish me the best for the future.

“I just wanted to say that there’s no big story around it other than I’ve decided to go off and try some other stuff,” the actor said.

Danny admitted he has an ambition to find the perfect role to define his career as an actor.

He explained: “I’ve had nine years of playing Mick and I think it [the role of Mick Carter] needs to be rested for a bit and I think I want to go off and I’m still looking for that defining role.

“I don’t know what that is yet, maybe it isn’t there and maybe it is but I’ve always been ambitious and I had a long career before EastEnders.

“I want to go out there and have a little go and I know the only way to do that is to walk away.

“I just wanted to put my little version out there,” he added.

Reflecting on his time on EastEnders, Danny confessed: “It does give me a weird little feeling to think I’ll be walking away from a job that has been a massive part of my life.

“And let me tell you something now, Mick’s exit is going to be a very powerful thing.

“When I go I would like the door to be left open and as far as I know it is.

“So, when I go out there and fail miserably I can come back with my tail between my legs,” he joked.

Commenting on Danny’s upcoming exit from the soap, an EastEnders spokesperson confirmed to Express.co.uk: “Danny will be leaving EastEnders when his contract comes to an end later this year.

“Danny has made Mick Carter an iconic character which we shall always be grateful for, however we won’t be saying goodbye just yet as there’s still quite some time – and plenty of explosive drama for Mick – to come before he departs Walford.”

Danny’s final scenes on EastEnders aren’t expected to air until later this year, so viewers will have to tune in to find out Mick’s fate.

EastEnders continues Thursday at 7:30pm on BBC One.