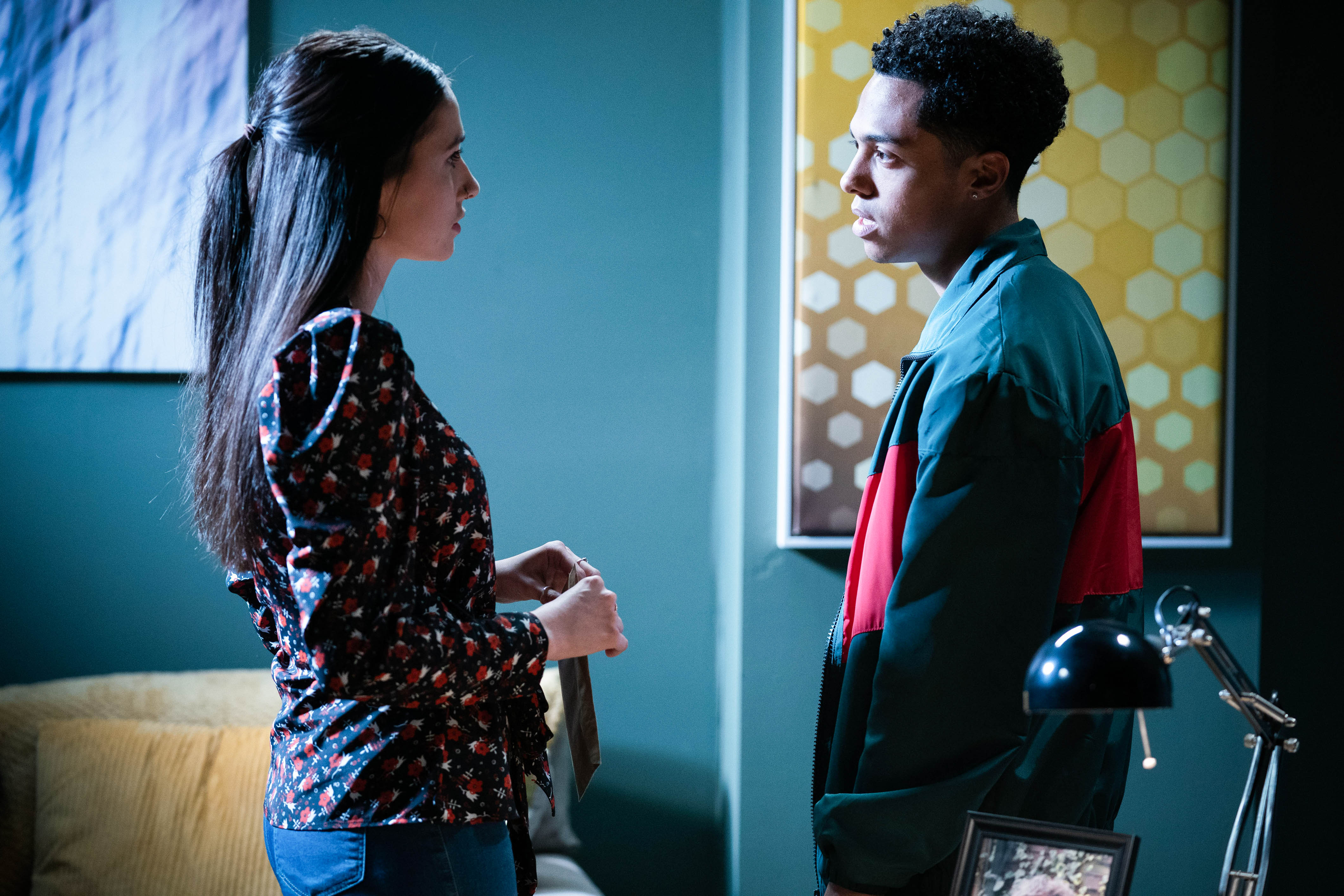 Keegan Butcher-Baker (Zack Morris) was horrified in EastEnders to discover that wife Tiffany (Maisie Smith) was spending more money on fillers, and in the heat of the moment he accused her of selling her wedding ring.

Tiffany was stunned by such an accusation, reminding him that he is the most important thing to her, and no matter how much she wanted the botox, she would never do that to him.

‘I think he’s more upset about the trust element of the relationship,’ explained actor Zack Morris.

‘[Keegan] wears his heart on his sleeve, with Tiffany he’s open, honest and the majority of stuff that Keegan does is for the benefit of their relationship and their marriage.

‘When he feels as though the relationship is one way, he has a problem with it. I think that’s where it stems from really, he doesn’t feel like Tiffany is in it with him 100%.

‘Of course the money that she’s spending is an issue too – he knows when she’s lying and when somethings wrong so it escalates in his head and goes from one extreme to another really.’

Tiffany has been struggling in recent scenes, feeling insecure about the way she looks, especially after comments online from vile trolls.

‘There’s a lot of moments where Keegan tells Tiffany she’s so beautiful and I guess to Tiffany it can sound trivial,’ added Zack.

‘Like he’s only just saying it, but from Keegan’s perspective he’s never dealt with anything like this before.

‘Everything is a learning curve and it’s a big one in the relationship, he thinks he’s dealing with it in the right way but clearly it’s not hitting home with her. He does feel a bit powerless in that sense and this is something he can’t fix.’

Tiffany walked away in tonight’s edition of the BBC One soap, heartbroken that her beau thought her capable of selling her wedding ring, and there’s more drama on the way next week, as Bernie Taylor (Clair Norris) collapses, leading to Keegan finding out that Tiff has been supplying her with diet pills.

‘He’s not very happy at all!,’ warned Zack. ‘It goes back to trust – he’s trying to better his family and he cares for Bernie greatly. He’s not 100% sure about the surrogacy himself, he didn’t like it when Tiffany wanted to do it and he’s not keen now Bernie is.

‘The fact that Keegan’s wife has been giving Bernie the diet pills behind his back as well – that’s a lot of the problem. Keegan’s very honest with his family and that’s not being reciprocated.

‘His sister is pregnant and regardless of what he thinks about the pregnancy, she’s putting everything into this so when Tiffany could have jeopardised that all– it’s hurtful.’

Tiffany attempts to explain herself in the aftemath of the revelation, but Keegan’s not interested, and instead heads off to retrieve his wages from the club.

While there, however, he comes into contact with Dotty Cotton (Milly Zero), who offers him a drink, and one thing leads to another.

‘I couldn’t believe it!,’ said Zack, of the plot development. ‘One of our directors Jamie saw me on set and said: “Ooh Keegan’s been a bit naughty hasn’t he!”. My shock made him realise that I hadn’t read it yet, so I got home and read through to see what he was talking about. I couldn’t believe it – it’s some proper EastEnders drama isn’t it!

‘I played [the scene with Dotty] that it’s totally in the moment, he’s not thinking about anything else. Keegan has always had a bit of a malicious side so maybe a bit of that came back into it too.

‘He’s thinking Tiff’s hurt him so who cares what I do now – which of course for someone that’s married is not the best move!’

And as for what’s next? Well, that remains to be seen, but Zack did give us a little taste of what viewers can expect.

‘Definitely more drama, Keegan’s now got to figure out how he’ll manage the situation,’ said the soap star. ‘There’s Vinny to add to the mix too as we know he has a thing for Dotty – it’s become a love square!

‘It all adds to Keegan’s guilt so it’ll be interesting to see what he does next. The world is now against Keegan and part of me thinks: “yeah I don’t blame them!”

EastEnders continues Monday August 2 at 9:05pm on BBC One, or catch all of next week’s episodes from 6am on Monday on BBC iPlayer!