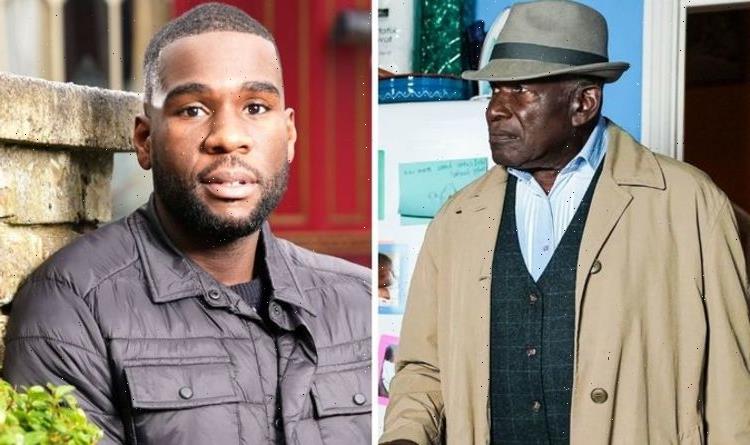 EastEnders: Janine is turned down for job by Suki

Patrick Trueman (played by Rudolph Walker) only discovered he was Isaac Baptiste’s (Stevie Basula) father last year on EastEnders after his wife Sheree Trueman (Suzette Llewellyn) explained she fell pregnant during their romance many years ago. Following Isaac’s recent schizophrenic relapse, Sheree has been trying to coax him and Patrick into holidaying in Trinidad. When Denise Fox (Diane Parish) tells them Sheree wants to move them there permanently, Patrick warns her he will do whatever it takes to protect his son.

Sheree has been determined to move back to Trinidad following her son’s recent hospitalisation to aid him in his recovery and give him time to forget about Lola Pearce (Danielle Harold).

On Friday night’s episode of the BBC soap, Isaac returned to his parents’ house feeling deflated about his condition.

A supportive Patrick said: “You listen to me son, it took guts to get yourself back out there today. It’s just going to take a little time for things to change.”

However, Sheree chimed in: “It’s exhausting, isn’t it? Having people whisper about you and saying things. Don’t you want a break from it? You just need to let the dust settle and then you can come back stronger.”

Patrick added: “Your mother’s right you know, so give yourself a little time to recharge.”

Sheree continued to persuade Isaac that they would only be in Trinidad for “a couple of weeks” as a holiday.

She even explained that Lola and her daughter Lexi (Isabella Brown) could still stay at their house – which makes Isaac agree to the Caribbean trip.

However, Denise then storms into their house demanding to know why an estate agent had put their house on the market.

A concerned Denise explained that Isaac’s school already believed he was in Trinidad looking after a poorly relative.

Denise then realises that Sheree has been doing everything within her power to get Patrick and Isaac to move to Trinidad with her forever.

Denise stated: “It’s not a holiday though, is it?

“You did everything you could to make sure Patrick and Isaac had no reason to ever want to come back.”

Sheree replied: “Don’t you dare lecture, me I will always do what is right for my son and my husband. Yes, I told the school you [Isaac] couldn’t come back and I did it for your own good. I am protecting you.”

A shocked Isaac asked if his mum was ashamed of him and wanted to hide him from everyone at school.

She snapped: “Why shouldn’t a mother just want her son to be normal?”

Isaac told her he didn’t want a normal life, instead, he wanted an amazing life with the woman he loves in Albert Square.