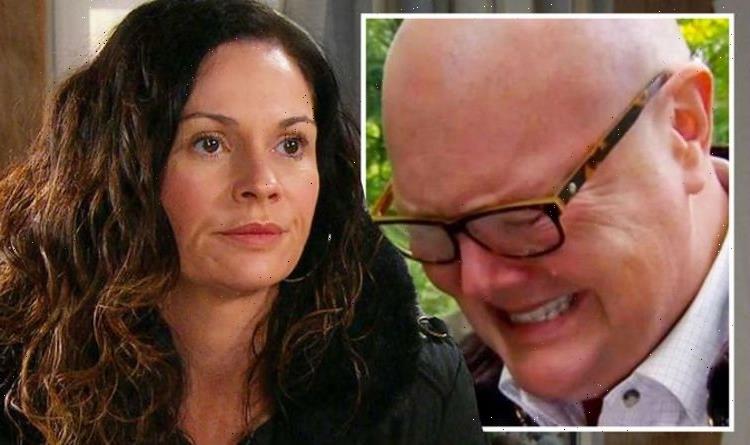 Chas (played by Lucy Pargeter) and Paddy (Dominic Brunt) are in the best position with regards to their relationship than they have in a long time on Emmerdale. With the former working to keep The Woolpack a float post-pandemic and her husband’s responsibilities at the veterinary surgery growing by the day, their schedules are always very busy. However, when the landlady discovers her other half is spending time with another woman in future episodes of the ITV soap, she could threaten to end their marriage if he’s having an affair.

The drama kicks off next week when Al Chapman (Michael Wildman) begins to have a say in the business, having bought shoes in the pub.

With Chas, Paddy and chef Marlon Dingle (Mark Charnock) present, the shady businessman tells them he thinks they should serve up ready meals instead of freshly-prepared food.

He thinks this would be a genius way to cut costs to save the pub and although Marlon is completely against the idea, his cousin feels differently and sides with her new business partner.

Going head to head, the Dingle family members argue over whether they want to sacrifice the quality of the food to ensure The Woolpack stays afloat.

However, as Chas tries to keep a roof over her family’s head, her husband has turned his hand to crime as he’s recently formed a partnership with village villain, Kim Tate (Claire King).

It was revealed last month he was helping the ruthless businesswoman by doping her horses so they can win races for her.

This was all done under the allusion she would provide money to keep The Woolpack above water and Al wouldn’t have the chance to invest.

Recent scenes have shown this plan didn’t work as the businessman still bought into the business so, by default, Paddy shouldn’t have to continue with his illegal line of work.

By the time Friday’s episode comes around next week, the vet is voicing his worries to his wife Kim still has a hold over him.

Therefore, he is still having to dope the horses and could be caught by the authorities at any second and put behind bars.

I’ve got a good feeling

Of course, Chas is less than impressed Kim still has an influence over her husband and begins to put a plan together to get the ruthless businesswoman out of their lives.

First of all, Paddy’s wife will need to find out what leverage the owner of Home Farm has on her husband but she might wish she’d never gone digging.

Knowing she could lose an asset in the vet, Kim could do her worst by telling an inquisitive Chas she has been having an affair with Paddy.

This would be completely out of the blue for the pub landlady as she would have thought her marriage was stronger than ever.

Unfortunately, with her hot-headed temper, the beloved character could accuse her other half of all sorts as she sees he has committed a huge betrayal.

Little would she know it’s all lies but because Paddy has lied to her in the past, she could find it difficult to get past this.

Does this mean one of the most beloved couples in the village are going to split thanks to Kim and her outlandish antics?

This could lead the landlady to sell the pub as she thinks the money her husband would have gotten from Kim was during their affair.

Chas wouldn’t want any reminders of the betrayal her other half had supposedly committed and leave the pub for good.

However, this would mean there would need to be another villager with a business mindset to join Al in running the establishment.

It seems the actress who plays Charity Dingle, Emma Atkins, has dropped a hint she could be someone waiting in the wings to take on the deeds to the pub.

Having sold her share of the pub last year in the fallout of her split from Vanessa Woodfield (Michelle Hardwick), it seems the beloved character will be yearning to get back behind the bar.

Speaking in an interview with Inside Soap, the soap star said: “Would I like to run the pub again? Absolutely. And I’ve got a good feeling about what’s coming next.”

Then again, Chas could stay on as the landlady and begin an affair with Al, with who she once developed a connection with once before.

The pair were mildly flirtatious with one another last year as the landlady suffered troubles in her relationship with Paddy.

Al and Chas never acted on their feelings for each other but given she thinks Paddy has had an affair, the landlady might well get her own back.

The businessman is known for having an eye for the Dingle ladies as he managed to have an affair with Debbie Dingle (Charley Webb) behind Priya Sharma’s (Fiona Wade) back.

If they were to pursue an affair, Al and Chas could become quite the power couple of the village but her husband would be left heartbroken.

Desperately trying to convince his wife he didn’t cheat on her, Paddy could be fighting a losing battle as she won’t accept what he is saying.

Taking to Twitter, Orit wrote: “I can’t wait for Chas to cheat with Al #Emmerdale.”

Emmerdale airs weekdays at 7pm on ITV, with an extra episode airing on Thursdays at 8pm.