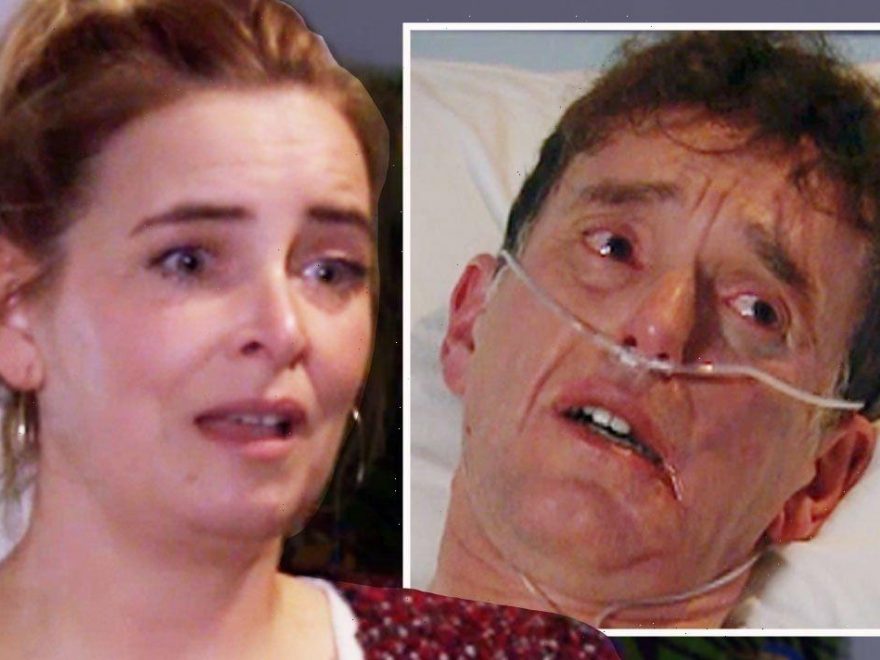 Charity (played by Emma Atkins) was left over the moon earlier this year when she managed to secure the deeds to the Woolpack pub alongside her son, Ryan Stocks (James Moore). Following the relaunch, the iconic setting of Emmerdale village life hasn’t been thriving with business, making it harder for the landlords to make a profit. What has made things particularly harder is Marlon Dingle (Mark Charnock) being out of action in the kitchen after he suffered a stroke. However, it seems the pub owner is having to make some tough decisions in upcoming scenes on the ITV soap but one of her attempts to cut the costs could prove to be fateful as she could end up losing the Woolpack.

It has been explained several times since Marlon fell ill, the Woolpack has hired a new agency chef to fill in for him whilst he recovers.

There is no set time on how long it can take someone to recover from a stroke and with Marlon’s having had a significant impact on his body, it is likely he could be out of work for at least a year, if not more.

As a chef, he will have to learn how to use his hands again when it comes to preparing food and it could take a while still even after his initial recovery and movement in his extremities are back.

Having just returned home from being in the hospital, Marlon has been trying to get used to being around his family again but Charity had some news for him.

Although she made it look like she was popping around to make sure he was ok, she was certainly pleased to hear his partner, Rhona Goskirk (Zoe Henry) was back working at the vets.

Sensing there was an ulterior motive for why Charity had come to visit him, Marlon asked his the Woolpack owner: “What do you want?”

“There is something, actually. It’s a bit awkward. It’s the pub, Marlon,” she replied with a look of anticipation on her face.

“We’re struggling a bit with you off sick,” she continued, to which Mary Goskirk (Louise Jameson) replied: “He’s hardly in a position to cook roast dinners, is he?”

Marlon sensed it was something to do with money as well, with the pub owner telling him: “Yes that’s right, it is money.

“Look, if there was any other way but we’re already forking out to give the agency chef full pay and the pub is having a bit of a quiet spell.”

“We will still pay you, Marlon. It is just we’re going to have to take it down to statutory sick pay,” the Woolpack landlady said.

“I’m so sorry, I honestly I am. I’m so sorry,” she concluded as she saw the look of worry and concern on Marlon and Mary’s faces.

This is going to make things increasingly hard for the couple’s finances as it seems Rhona will have no choice but to return to work full-time.

However, as things don’t pick up for the pub, it seems Charity could make yet another decision about Marlon’s future as the chef.

With no certainty on when he is able to return to work, the pub owner could decide she is going to give the kitchen contract to the agency staff.

This means she would be able to get rid of Marlon and there would be more money in the bank as she wouldn’t be paying out for another employee.

Therefore, when Marlon is recovered, whenever that will be, there will be no job for him to return to and he would have to look for alternative employment.

Rhona has become increasingly hot-headed since Marlon’s stroke and she doesn’t take any prisoners, not even if it is a Dingle.

She could decide to launch a case against Charity under the grounds of unfair dismissal, telling the Woolpack owner they will fight this out in court.

With Ethan Anderson (Emile John) representing her and Marlon, Rhona could feel confident they are going to win the case.

As the war wages in the courtroom, the judge could agree what Charity did was outside the remits of her role as an employer.

This means she took the law into her own hands and there would be consequences for unfairly dismissing Marlon because of his current condition.

As well as reinstating Marlon in his former role, Charity could also face a number of hefty fines for what she decided to do.

With all the money mounting up, the pub owner would find herself struggling to keep her head above water and she feels she cannot payout.

Realising there is no way out of her current predicament, Charity could decide she will have to sell up shop.

Selling the Woolpack, Charity would hand over the contracts of employment to the new owner, including how to deal with Marlon.

This would leave the landlady barely scraping the barrel as she tries to think of how she is going to find another source of money.

Will she be forced to return to a life of crime as she sells her beloved stronghold?