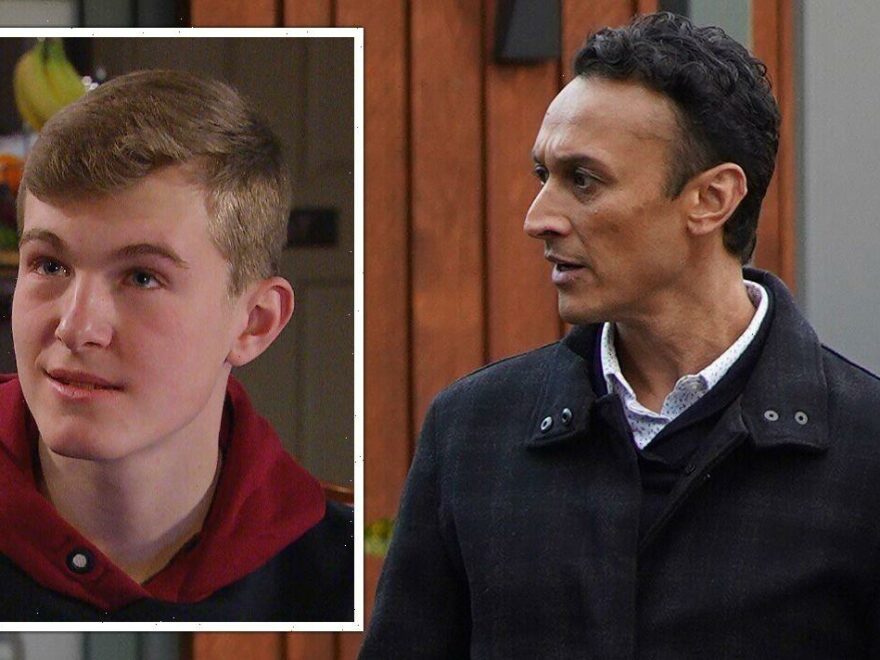 Emmerdale: Gabby Thomas turned down as she tries to kiss Nicky

Laurel Thomas (played by Charlotte Bellamy) has been nothing but supportive of her son Arthur (Alfie Clarke) in recent months on Emmerdale. However, ITV soap spoilers have revealed his stepdad Jai Sharma (Chris Bisson) ends up at the centre of a homophobia row after an LGBTQ assembly is cancelled at Arthur’s school.

In upcoming scenes, Marshall (Max Fletcher) stands up for Arthur against another bully in front of Nicola King (Nicola Wheeler) and there is a moment between the two boys as Arthur realises Marshall has his back.

The following day, Laurel makes a call to the school when Arthur tells her his LGBTQ History assembly has been cancelled.

After getting off the phone, Laurel reveals one parent has complained about the assembly.

After an insensitive comment from Jai, bewildered Arthur accuses him of being the one that called to cancel the assembly.

A hurt Arthur feels as though his stepdad is encouraging him to suppress his sexuality and keep it under wraps.

Jai is left pained by Arthur’s accusations – so perhaps he had nothing to do with the cancelled assembly after all?

Later on, Marshall comes to check on Arthur after the assembly is cancelled.

But an irritated Arthur feels like no one is being direct with him and he warns Marshall he needs to leave if he is not being honest with him.

Marshall’s cool boy bravado is stripped away and the two boys almost share a kiss.

However, when Marshall’s dad calls him, the moment is broken so he panics and rushes off from Arthur.

The following day, Laurel has to tell Arthur he can do his presentation at the assembly but only when some parents have withdrawn their children.

Will Laurel be able to support her son through this difficult time?

Can Jai prove he was not behind the complaint made against his assembly?

The first person Arthur told about his sexuality was Nicola when he used a game of hangman to spell out, ‘I am gay’ as he couldn’t bring himself to share it aloud.

Nicola was extremely supportive as was Laurel when she was told.

Laurel said at the time: “Love is love. Love feels the same for everyone.”

“And only you get to decide who you give your heart to, nobody else,’ she told him in emotional scenes.

What will happen between Arthur and Marshall in upcoming scenes?

Will Marshall apologise to Arthur for rushing off after their near kiss or will he revert back to picking on Arthur over his sexuality?

Emmerdale airs on weeknights at 7.30pm on ITV and ITVX.