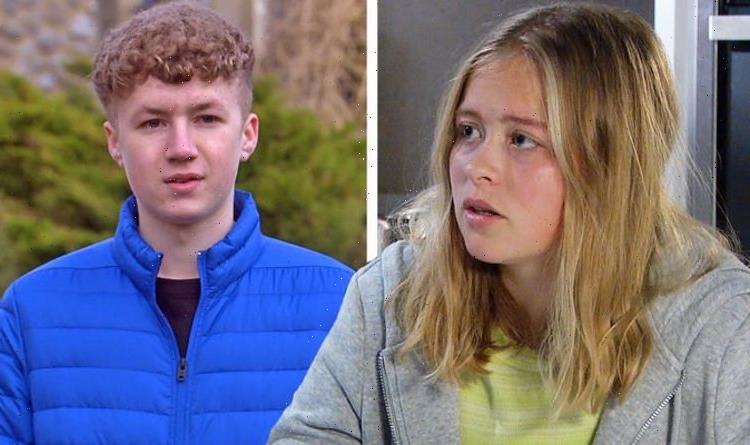 Emmerdale: Liv is hospitalised due to alcohol abuse

Warning: This article contains discussion of alcoholism and rape.

Emmerdale fans saw Liv Flaherty (played by Isobel Steele) hospitalised last week after drinking herself into unconsciousness. Lying in the hospital bed, she realised she needed to get help and once back in Mill Cottage, found herself logging onto an Alcoholics Anonymous support group. Many thought this would be the turning point for the teenager, but as with any road to recovery from addiction, it is never easy and next week, she will be seen swigging from a can of lager. But in a dark turn of events, Liv experiences flashbacks and realises she had a tussle with Noah Dingle (Jack Downham).

Liv has managed to get herself a job at the HOP and with it, found a friendship in Laurel Thomas (Charlotte Bellamy), who is also a recovering alcoholic.

Having discussed how difficult she is finding everyday life, Laurel decides to help her stay away from temptation.

While she is appreciative of Laurel’s kindness, Liv is feeling suffocated by those closest to her.

But with them constantly referring to sobriety and her struggling with it, it all gets too much for Liv.

Fans will see her break down in front of a concerned Laurel who does her best to advise her on what to do next.

However, Liv ends up crossing paths with Hannah and George and when they invite her for a drink, she accepts and starts swigging from a can of lager.

When she wakes up back at home, she is full of confusion and regret, and notices bruises on her arms – but has no idea what happened to her the night before.

Aaron will then return and explain how he found her in the doorway a few hours prior.

Liv will struggle with disorientating flashbacks and later, she’s shocked and sickened when she finally figures out it was Noah who she was struggling with last night.

When Liv spots Gabby Thomas (Rosie Bentham) she tells him what she can remember from the previous night and Gabby is reeling when Noah is mentioned.

Following her own run-ins with him, Gabby tells Liv that they might be dealing with the aftermath of rape and it is Aaron who walks in on their conversation.

He has heard everything and storms out to confront Noah.

Viewers will have to wait and see what Aaron says to Noah and how he reacts, but when he returns to the cottage, he urges his sister to report what happened to the police.

But Liv feels burdened by the decision she faces. Will she report him?

The next day, Noah’s mother Charity Dingle (Emma Atkins) is shocked to hear the rumours and does some digging to see if there is another side to this story.

Should Noah have attacked Liv, could she find herself pregnant?

Emmerdale has not confirmed whether or not Noah did indeed rape Liv and fans will have to wait and see how it plays out on screen.

It comes after the actress who plays Liv spoke about this storyline and whether her character has reached rock bottom yet.

“It’s hard to know where the rock bottom is,” Isobel said. “There’s been times when I’ve read the scripts and thought ‘this is rock bottom’. It’s like, how far can you push her?

“She’s yet to hit rock bottom, it might be a good thing because she can hopefully come to her sense on her own and realise she can’t live like this.

“But also if [being thrown out by Aaron sparks] rock bottom, then it’s not great because she really is on her own and really is vulnerable.”

And it is Aaron who Liv needs support from the most.

“They’ve got such a good bond, it’s such a shame it’s this bad at the moment – it’s not been this bad since I joined the show, it’s the worse they’ve been – they’ve always been rough, but this is serious,” Isobel added.

If you or anyone you know has been affected by Liv’s storyline, please see Alcoholics Anonymous’ website here, or Rape Crisis’ website here for free, confidential help and advice.