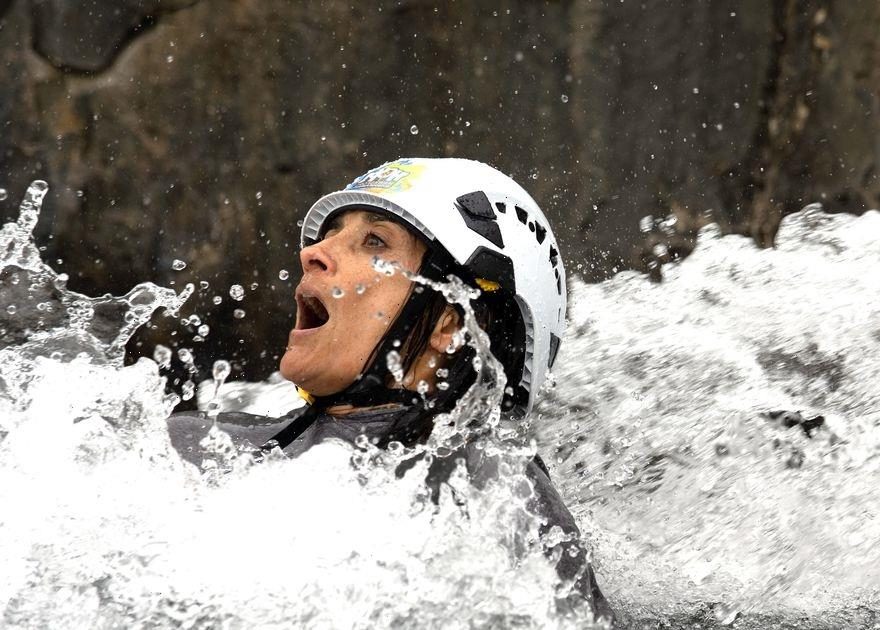 Emmerdale star Rebecca Sarker has made it clear that her character Manpreet Sharma might not make it out of super soap week alive.

Next week's 'survival week' in the Dales will see a gang of adventurers head out for a team building retreat with the HOP – with serial killer Meena Jutla among their ranks.

As they traverse icy rapids, waterfalls and a giant maize maze, only one thing is certain – at least one character will die, with producer Kate Brooks promising: "When you do have a character like Meena, who does have a thirst for murder, not everybody is going to survive – certainly not people who have crossed her."

Viewers will see Meena compromise one of the harnesses set out for the trip.

The evil deed is meant for Victoria Sugden, but Manpreet accidentally ends up with the damaged equipment instead.

Speaking to Daily Star and other publications, actress Rebecca Sarker explained of the week: "I think it’s safe to say that when Meena’s on the loose, nobody is safe – either by design or accident.

"She sets out this smorgasbord of horrific delicacies for everyone to enjoy, and it sets in motion a catalogue of events that affect – if not Manpreet directly, as she’s not the intended victim – then what happens to Manpreet and Charles is a byproduct of Meena’s evil machinations."

But does Manpreet know about her sister's psychopathy?

"They’re sisters, obviously, so they’ve got a shared history in terms of growing up together. Viewers already know that Meena slept with Manpreet’s ex-husband; awful though that is, it’s nothing compared to murder.

She added: "The cracks have started to show with Meena’s lack of empathy, which is really quite chilling – and it comes out in very mundane situations that she just does not care.

"Her MO is winning and coming out on top to the detriment of all others, and of course this involves Charles as well."

Paige Sandhu, who plays Meena, explained previously that while Meena can't "love" Manpreet, she does feel "affection" for her – but is intrigued to know what will happen with the harness.

She said: "Meena always chooses herself above everyone else, so she’s freaking out, she’s worried but there’s also this thrill of, 'If she did go splat, what would that look like? I've never seen something like that, that would be so cool to watch!'.

"So it’s that juxtaposition of all those things."

Paige added: "She’s a psychopath and they can’t feel emotions like you or I can – so she isn’t able to love like I love my actual sister.

"But I do believe that Manpreet is the closest Meena can get to loving someone – so it’s not love but there’s definitely affection there."

Rebecca admitted Meena is a "puppet-master" of events, explaining of her on-screen sister: "Meena makes no secret of the fact that she’s not a fan of either Rishi or Andrea [when it comes to Manpreet], so she's desperate for Manpreet and Charles to get together.

"She likes to influence events and have control. I think she really enjoys the game, she enjoys being the puppet-master and creating havoc with very little regard for other people’s feelings."

Speaking of manipulating people, Rebecca promised there's "more to come" on the Ethan front, too, after Meena catfished Charles' son pretending to be his mum.

But filming the stunts was "exhausting" for both Rebecca and Kevin Mathurin, who plays Charles.

Rebecca explained: "We had a fantastic stunt team and each had a stunt double.

"I think we're all reasonably strong swimmers. and reasonably fit and able, but the thing is – swimming doesn’t really come into it when there’s 15 tonnes of water being [thrown at you]!"

Kevin added: "The current is so strong that swimming doesn't really come into it – it's more like survival. The water is going to take you where it wants to, so it's about having a technique of swimming against the current – it took a lot of strength.

"You could also stand up in it, it wasn't that deep – but you really had to make sure you had a lot of strength and didn’t knacker yourself out. It was exhausting."

Rebecca chipped in: "At one point we were all attached to a rope and towed by a power boat, that was interesting. No swimming involved there – that was just hanging on for dear life!"

Kevin agreed: "Yeah, we had to be dragged along to make it look like the current was sweeping us. It was like water skiing without the water skis."