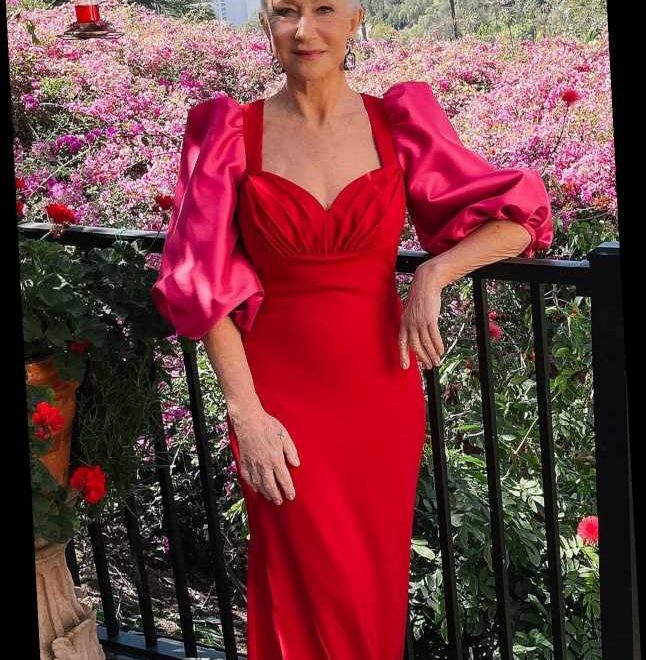 The Hollywood icon appeared on Sunday's Screen Actors Guild Awards telecast as a presenter, where she also discussed her love for wildlife — and a chance meeting with a bear while quarantining, in which she kept her cool and was able to get the animal to leave her property.

"I did have a bit of a meeting with a bear," said Mirren, 75. "I was so excited to see a bear, but then, of course, you can't allow bears to get too familiar with human beings because they are wild animals. So I chased him away."

Mirren revealed of her strategy, "You're supposed to make yourself as big as possible and say, 'Bad bear! Bad bear!' 'Cause it was not a big bear — it was a smaller bear — so I just said, 'You naughty bear, go on. Go away!' "

Mirren may have had to get a little harsh with the bear for safety reasons, but in reality, her love for animals (and the preservation of their natural habitats) couldn't be more pronounced.

Last year, the Oscar, Emmy and Tony winner lent her voice to Escape from Extinction, a 90-minute documentary by American Humane that "examines the work of the major zoological organizations that are racing against the clock to preserve the million species disappearing in today's Sixth Mass Extinction," according to its official website.

Speaking with AARP in October 2020, Mirren said she doesn't "tend to go to zoos because I find it uncomfortable" and was previously "in a state of ignorance about how radically certain zoos have changed, and how many species have become extinct in my lifetime."

"Do your homework and find out what kind of a zoo it is you are visiting," she advised others wanting to visit one of the parks. "Is it accredited? See if the zoo is doing the kind of work and the animals are living in a way you feel is righteous. Never go to the kind of zoo where you're there to have your photo taken with a wild animal. That is unconscionable."

Mirren has also shared various stories about life in lockdown amid the ongoing COVID-19 crisis over the last year, including relatable tales on topics including going makeup-free to dental hygiene.

During an appearance on the British morning show Lorraine in August, The Good Liar actress opened up about the slow pace of her day-to-day life in quarantine with husband Taylor Hackford, sharing that one small accomplishment helped put things into perspective.

"Because my life up to that point, I was constantly packing and unpacking, I never got to the end of a tube of toothpaste," Mirren joked during the virtual interview.

She added, "My husband and I were in our house in America and I used up a whole tube of toothpaste [for] probably the first time in my life!"