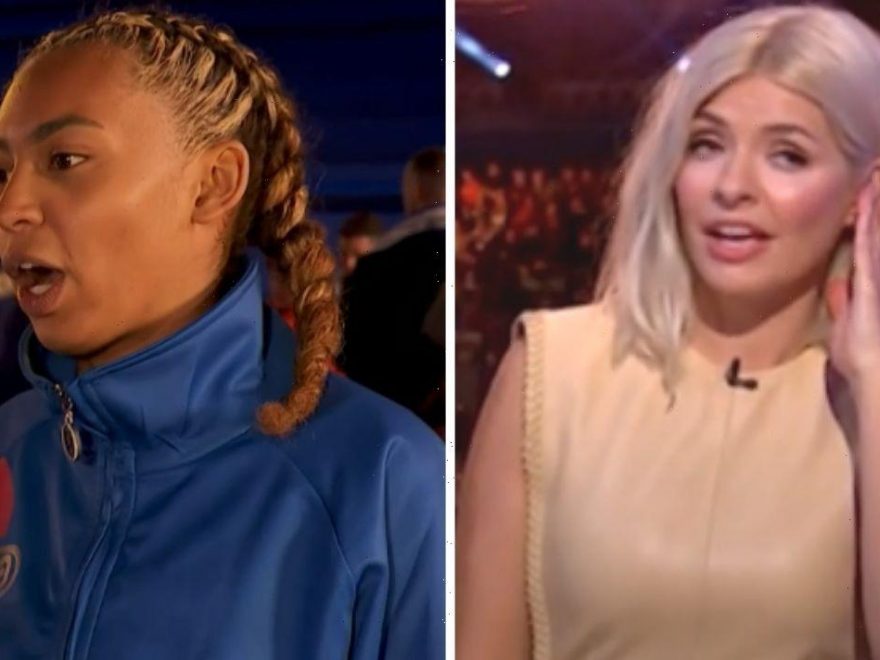 On Wednesday night’s The Games, ITV hosts Andrew ‘Freddie’ Flintoff and Holly Willoughby were back to host the sporting programme. The show, which began on Monday, sees six male and six female celebrities training to become athletes by participating in a series of sports challenges. However, host Holly couldn’t resist bringing up Phoenix and Chelcee’s clash after the 50m breaststroke on Tuesday night.

The This Morning presenter’s comment came after Phoenix came in first place for the women’s javelin event.

Mel B’s daughter scored an impressive 22.46m against her fellow celebs, with Christine McGuinness close behind her with 20.05m.

However, as the cameras cut back to Holly and Freddie in the studio, the mum-of-two made a cheeky remark about Phoenix’s victory.

“Well that is a brilliant result for Phoenix there who won the women’s javelin with a throw of 22.46 metres,” Holly began.

The host proceeded to put her hand to her earpiece as she pretended to see if her score was correct.

Gasps could be heard from the studio, as Freddie chipped in: “Stirring the pot there, Holly eh?”

On Tuesday night, Phoenix and Chelcee argued over who came third in the 50m breaststroke race.

During Wednesday’s show, Holly and Freddie replayed a clip of the event and finally cleared up who came in third place.

They also played a clip of the aftermath which showed the two women rowing about who was right.

Chelcee later protested: “I was clearly touching the wall. Phoenix, you’ve got to beat me fair and square.”

Discussing the awkwardness on the bus afterwards, Freddie laughed: “Kevin [Clifton] did not know where to put himself.

“The women are getting proper competitive, aren’t they?”

“They are,” Holly agreed. “They really are. So, should we clarify this once and for all?”

She continued: “The results were verified by an independent judge after the show.

“The rules say you must have both hands on the touchpad at the finish line with enough force to trigger the electronic timer.

“I didn’t know that. The Independent judge said Phoenix came in third place, three-hundredths of a second and Chelcee was fourth.

“So, let’s draw a line under that please.”

The Games airs weekdays at 9pm on ITV.