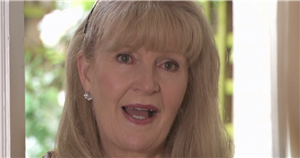 Hollyoaks fans have recognised newcomer Lydia, who is played by Cathy Shipton, after she turned up in the soap earlier this week.

Lydia made her Channel 4 soap debut on Monday as the wife of Luke and Zara's deceased uncle and she arrived in the Chester village to give advice to Cindy about Luke's FTD.

However, soap watchers were left distracted during the scenes as they instantly recognised actress Cathy from Casualty where she played the iconic Lisa "Duffy" Duffin on-off for three decades.

Hollyoaks viewers went wild over the star's debut as they took to Twitter to share their thoughts.

One person joked: "What the hell is #Duffy doing in #Hollyoaks?"

Another viewer commented: "It's Duffy from Casualty #Hollyoaks."

While a different excited soap watcher added: "Duffy's in #HollyOaks!"

Duffy was tragically killed off on Casualty in 2020 after the character, who had been battling dementia, died from a catastrophic bleed on the brain.

It comes after Kelly Condron recently made a return to Hollyoaks as Zara Morgan after 16 years.

The actress', 38, character Zara made her first appearance in 1999 and she left the Chester village in 2005 to head to Thailand to work for a charity.

Eco-warrior Zara arrived back in the Chester village to attend the funeral of her mother Sue after learning about the service on social media where she reconnected with brother Luke Morgan (Gary Lucy).

Talking to Daily Star in July prior to the reveal, the actress said: "My children don't even know. You can't tell a 10 year old something and ask him to keep it a secret that's just cruel.

"It's going to be quite funny when he finds out. He's either going to think it's the coolest thing in the world and I'll be the cool mum for the week or he's just not going to be bothered.

"I've been coaching 14 to 18 year olds so I'm sure they'll have something to say when they see I'm going back to Hollyoaks."

While she told Digital Spy of her return: "It's brilliant and I'm having an absolute ball. It's fantastic to be back on set. A lot of the crew are still the same and some of the old cast members are still there too.

"It was during lockdown that I got a call to say that they were thinking about this and they asked if I'd be interested. I have actually been asked to come back to Hollyoaks before, but it's never quite worked out because it's never been the right time for me.

"The show's new producer Lucy Allan had just come on board and there was a new team, with some really exciting storylines planned. When I found out all of that information, it wasn't something that I could turn down, to be quite honest."

Hollyoaks continues on weeknights at 6:30pm on Channel 4 and 7pm on E4.

For all your juicy Hollyoaks updates, sign up to our daily OK! newsletter.