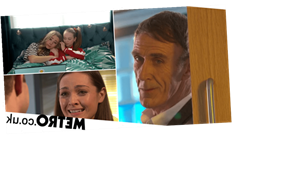 Hollyoaks’ only original character Tony, played by Nick Pickard, has a brain tumour… but with his evil dad Edward (Joe McGann) as his Doctor, who is lying, manipulating, and drugging his own son, will Tony be safe? Just how far will Edward go on his mission to get Diane(Alex Fletcher) back?

Juliet is falling for Peri

If Juliet’s life wasn’t complicated enough, with being trapped in the drug world and hiding it from her family, she also must face her feelings when she develops a crush on Peri Lomax. Luckily, her best friend Sid is there for support and a shoulder to cry on.

Kyle, and Darren bond over Darren’s depression, but Kyle looks to be spiralling out of control himself… Nancy is forced to shut him out of her life after he continues to hide drugs from her. After a car crash in the village and a desperate call for help, what’s next for Kyle? Meanwhile, Darren finds the courage to speak up in heart-breaking scenes as he finally admits to Mandy, played by Sarah Jayne Dunn, that he is depressed.

Sienna and Warren get close

Turbulent exes Sienna and Warren, played by Anna Passey and Jamie Lomas, are overjoyed with their son, Sebastian’s recovery, and happiness brings them closer together as they share a passionate kiss. Sienna needs to tell her boyfriend, Brody, but Warren begs her not to. Will this cause more heartbreak for Sienna?

The Devereaux’s mystery deepens, as Felix and Walter’s secret is out… that Toby and Celeste were sold as babies. Richard Blackwood’s character Felix is definitely a bad boy, and Lisa, played by Rachel Adedeji, can’t resist, so will this be the start of a sexy love affair, or is he still harbouring feelings for former flame Martine, played by Kelle Bryan.

The relationship has been rocky from the start and things are finally looking up for the love birds as Mitchell gets down on one knee and proposes to Scott, and he says yes… But there’s trouble ahead when Mitchell is arrested for malicious wounding with intent to cause bodily harm… but is he guilty?

Who will John Paul choose?

John Paul, played by James Sutton, flirts up a storm with new hunk PC George Kiss, and Sally wants her son to try for love again. However, it seems James is still harbouring feelings for his former flame, as he admits that he loves him, but who does John Paul want…

Jordan has already shook up the village by bringing his drug network to the local school, and he continues to wreak havoc when he starts dating Peri… and secretly starts hooking up with Peri’s mum, Leela. He’s playing with fire, but will he get caught…

Drug dealer Jordan sets his sights on young Charlie Osborne as he recruits children to shift drugs through schools, and it looks like Charlie takes him up on that offer…

Sid has been working for his cousin, Jordan, by shifting drugs around the school, and it looks like he is caught red handed, and with his troublesome background, Sid may be out of Hollyoaks High for good…

Brendan is back – kind of!

Brendan Brady is back on our screens as Hollyoaks continues to showcase older episodes and celebrate the best romances, bust ups, weddings, stunts and heartbreak’s the show has to offer, over the next few months.