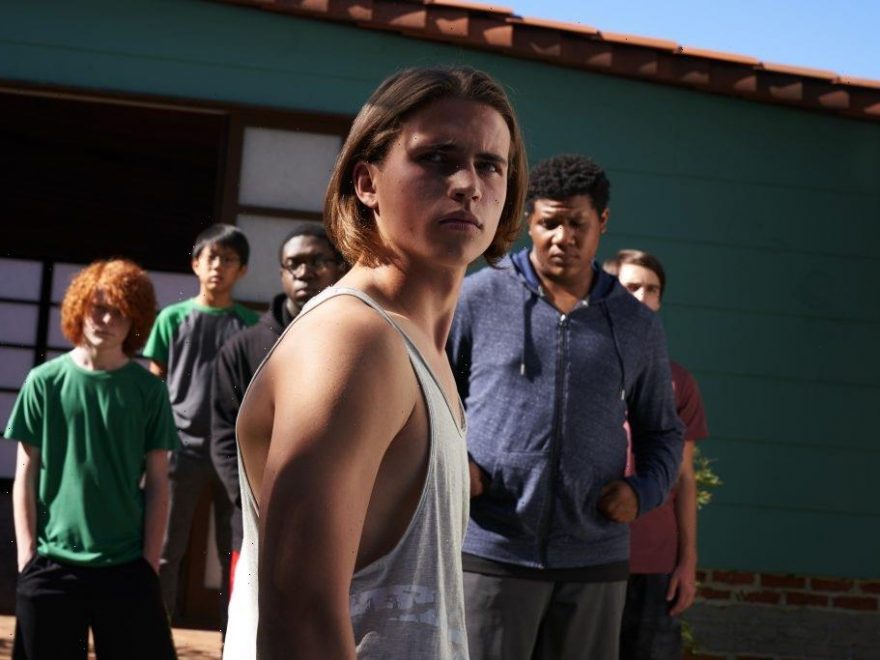 On Cobra Kai, Tanner Buchanan is part of a love triangle between Samantha LaRusso (Mary Mouser) and Miguel (Xolo Maridueña). In real life, he has been with Lizze Broadway since they were kids. It wasn’t always happily ever after though. Buchanan revealed in a recent interview that they once broke up, and it was his fault.

Buchanan was a guest on Anna Faris’s Unqualified podcast on Aug. 16. When Faris asked Buchanan about his biggest heartbreak, he told her the story of his breakup with Broadway. Fortunately, this has a happy ending because they got back together.

Tanner Buchanan accepts responsibility for his breakup with Lizze Broadway

Broadway and Buchanan were teenage sweethearts. Both are actors, and Broadway recently starred in American Pie Presents: Girls’ Rules. Buchanan said he’d become insufferable by the time he hit 17 or 18.

“I will admit, it was my fault,” Buchanan told Faris. “I was actually kind of being an ass during that time. So they had every right to [break up with me]. I don’t know what it was inside of me that felt like I could act the certain way that I was acting, but I did anyway. Then I was devastated. That was definitely a reality check for me. To me, I felt like I truly lost everything and I don’t ever want to act that way again or be that person again. It was a very big learning experience which was nice.”

Broadway was upstairs while Buchanan spoke to Faris. So, Faris asked Broadway to come down and tell her side.

“Well, I was an -sshole too,” Broadway said. “We’ve grown together. Being so young you don’t know anything but you just instinctively know that oh, I can’t lose this person. It’s kind of crazy.”

If Buchanan was acting up enough to drive Broadway away, he suffered proportionally. Buchanan recalls wallowing in his sorrow.

“I was, for probably about a month and a half straight, I would cry every night,” Buchanan said. “I don’t just mean cry, I mean bawl until I tired myself out and made myself go to sleep, and just had a bunch of breakdowns. Every night I’d put on repeat The Fault in Our Stars.”

“Oh, and you watched Fault in Our Stars for days and days because you were so sad,” Broadway said.

Lizze Broadway reveals how he got her back

Buchanan didn’t remember how he got Broadway back, but she did. It actually embarrassed Buchanan because it wasn’t especially flattering.

“He gave me an ultimatum and I was too afraid to lose you,” Broadway said. “You’re like, ‘I can’t talk to you anymore if we don’t get back together.’ And I was like, being 17 because we’ve been together for six years now…”

Buchanan was shamed of his behavior all over again.

“Did I?” Buchanan explained. “I was still an ass.”

Both Broadway and Buchanan look back on their breakup as growing pains.

“We still talk about some of the stuff when we were younger and how we’ve had a lot of conversations about how we’ve grown as people,” Buchanan said. “In a short timeframe how much you learn about yourself.”

Now in their 20s, Broadway concurred they’ve matured and hope to stay together.

“Yeah, because I didn’t know who the hell I was,” Broadway said. “You probably didn’t know. We had no idea. Maybe it’s fate, magic. As much as we didn’t know about ourselves, I knew you. Ask me in five years, but we’ll find out. Yeah, just kind of that. I don’t distinctly remember. It was so long ago.”