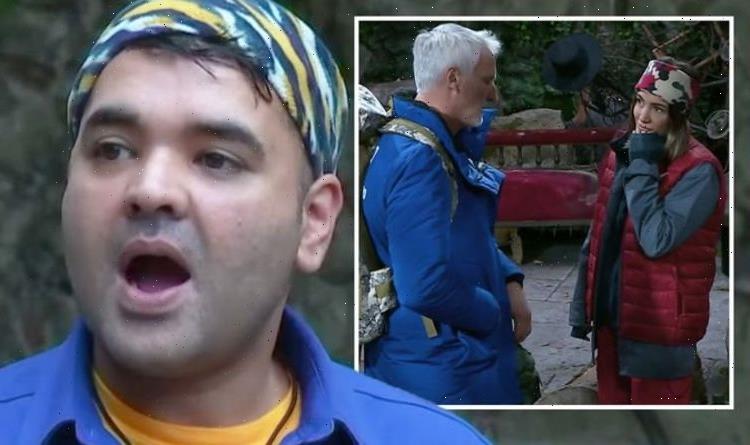 I'm A Celeb: Ant and Dec in hysterics as Richard struggles in trial

BBC journalist Victoria Derbyshire has given ITV viewers an insight into how campmates were able to share their private life stories without fear they would be aired on the show. The TV broadcaster took part in last year’s series of I’m A Celebrity…Get Me Out Of Here! which was also the first year where filming took place in North Wales following the COVID-19 travel restrictions. Victoria was in the castle alongside the likes of Jordan North and Giovanna Fletcher and has now revealed how their chats wouldn’t be broadcast.

The TV presenter was the fourth celebrity to be eliminated but had previously opened up on how colleagues at the BBC weren’t sure of her inclusion.

After successfully convincing the BBC that the show was a good idea for the current affairs presenter, integrity was important for all celebrities.

And in order to avoid any conversations which Victoria may not have wanted to air, she revealed campmate Shane Richie had the trick.

Writing in The Mirror the contestant from last year said: “If we ever wanted to talk about something privately that we didn’t want to appear on television, Shane told us to sing a famous song in the middle of it.”

Delving into why this could stop ITV airing the chat, Victoria added: “Because ITV wouldn’t want to pay for the rights to the track.”

Jordan North, who came second in the series, also backed this claim, he said: “Before we went in, we were told not to sing any songs by Queen, The Beatles or Disney because we can’t get them cleared.”

Both Victoria and Jordan ended up finishing behind last year’s Queen of the Castle, Giovanna.

And this year, Ant and Dec have whisked 12 new famous faces to Wales all of whom hope to follow in the author and podcaster’s footsteps.

However, shockwaves have already been sent through the camp as Richard Madeley has had to cut his time on the show short.

Originally entering as part of the Clink, Richard had been enjoying his stint alongside the likes of Naughty Boy, David Ginola, Danny Miller and Arlene Phillips.

But on Thursday, the Good Morning Britain star revealed he’d had to withdraw from the show after being admitted to hospital.

In a statement released by Richard on Thursday afternoon, he revealed he was “fine” and that his hospital trip was a “precaution”.

He said: “Firstly just to say that I’m absolutely fine. I started to feel briefly unwell in the small hours of the morning and was taken to hospital as a precaution.

“By leaving the camp, I had consequently broken the Covid ‘bubble’ and as such I’ve had to leave the castle and all the wonderful celebs that remain in the camp.

“Obviously, I’m gutted to be leaving so soon but the safety of all the campmates is the number one prior

The former This Morning host went on: “I’m incredibly excited to watch their journey continue…even more so at the prospect of being somewhere a little warmer than Gwrych Castle.

“Thank you to everyone who supported me on my brief but completely unforgettable adventure – I’ve made some great friends and honestly had the time of my life.”

Richard may have left but the camp has also welcomed two late arrivals in the form of Adam Woodyatt and Simon Gregson.

I’m A Celebrity…Get Me Out Of Here! continues on ITV on Thursday at 9pm.