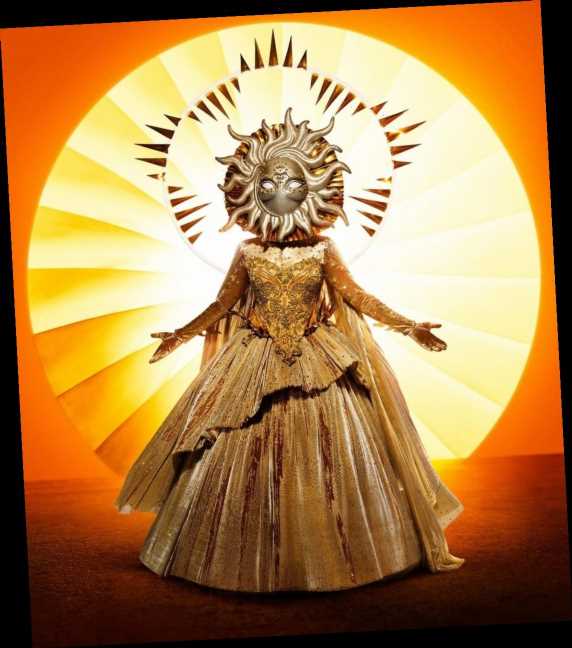 Shout-out to the Masked Singer franchise for getting a bit more creative with the costumes on season 4! Creative, but also deranged, to be sure. The Sun in particular has got quite the get-up and it’s honestly kind of…pretty? Either that, or I’ve been completely brainwashed by this show to the point where my vision is permanently clouded. Whatever. The ‘fit is a lewk—definitely a smidge terrifying because WTF are those eyes, but also, a couture moment I can get behind.

But we’re not *just* here for the absurdist fashun! You, me, and the rest of the people who have nothing better to do are curious about which poor celeb is our dear Sun’s true identity. Let me say, they’ve got pipes! Here are the best (read: pretty decent) theories about who the Sun is from les internets.

The Sun’s first clue package is honestly jam-packed with bright, shiny hints, including but not limited to:

Even though I still have no idea who our lil Sun friend is, the second round of clues definitely delivers us eager and confused watchers more valuable intel. Let me give you the lowdown of what we’re working with:

Not a bad guess, IMO. The Sun has some incredible vocal cords on them, so I wouldn’t be surprised if they were a vet in the music industry. Judge Nicole Scherzinger first made this guess because she found ties with the “gold member” card to her husband David Foster who has a bunch of gold records.

Robin Thicke hopped on the theory too, thinking that all the possible different song references could be connected to songs she sang during her time on American Idol. And Nicole still stuck with Katharine after the Sun’s second performance and thought the “into the woods” Easter egg could be an ode to her time on Broadway.

The thing is…Katharine is currently pregnant, which makes me think she probs doesn’t want to hop around in a sweaty Sun costume at the moment.

Fans think the Sun is THE powerhouse Xtina thanks to the Mickey Mouse hint and the fact that some of her albums are certified gold. And it’s obvious the Sun can sing, but I personally don’t think it sounds like Christina’s iconic voice. No shade to le Sun, but Christina’s voice is just so distinct and much more, er, powerful. A+ for effort though!

there’s no shot the sun on the Masked Singer is anyone but Christina Aguilera. dont @ me

Masked singer season 4… the Sun has to be christina Aguilera

@xtina I believe you are the Sun on The Masked Singer.

Come on, guys. Miley is better than this!!! And none of the Sun’s performances sound…anything like her? Like, okay, I get it. Her middle name is “Ray” and that could be associated with the sun and she was on Disney Channel, hence the Mickey Mouse-shaped planet. But no way she’s the one. Maybe another ex child star, tho?!

The sun is Miley Cyrus.

I did but the Disney clue, “Ray” of sunlight, and her voice, it has to be Miley Cyrus

I will literally question the very nature of reality if Kylie ends up being the Sun—however, I will admit there are some convincing clues. Starting with the obvious: The Sun says “rise and shine,” which we all know is Kylie’s catchphrase, ugh:

The Sun also mentions “seasons,” which could be a Keeping Up With the Kardashians reference, and we know Kylie has felt the pressure of stardom. On the other hand, she’s a billionaire who barely filmed her own show, so…yeah. Maybe this isn’t her.

Seems unlikely, but fans are pointing to the obvious Disney references and the fact that Demi was in Sonny With a Chance. Plus, Demi sang a version of “Let It Go” in Frozen.

Apparently, LeAnn had a Disney Channel special early in her career—and people think the Sun sounds just like her in this performance of “Cuz I Love You,” by Lizzo:

And get this: There’s a YouTube video of LeAnn singing the song last year, and it sounds almost exactly the same.

As one YouTuber mused, “If that’s not LeAnn Rimes, I’ll eat my shoe.”