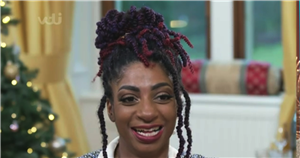 I’m a Celebrity Get Me Out Of Here! contestant Kadeena Cox has revealed that she had the chance to tuck into sweet treats and tasty meals during the campmates’ isolation away from the castle.

Kadeena, who became the second star to be eliminated from the ITV show, opened up about the strange time when she and her fellow campmates were evacuated due to bad weather.

During an appearance on ITV’s Lorraine, Kadeena, 30, told host Lorraine Kelly it was a “bizarre” situation but that she wasted no time in being able to eat something other than plain rice and beans.

The athlete explained: “It was the most bizarre situation. When I signed up I thought it was going to be kind of plain-sailing – but it really wasn’t.”

Kadeena continued: “I think the first thing I had was tomato soup, which was divine. Then followed by Percy Pigs the next day, obviously.”

However, Kadeena added that she was conscious that she didn’t want to overindulge too much as she knew she would soon be back on camp rations.

She said: “And I just had salmon and veg. It was really simple because I knew going back in we’d be back on rice and beans so I didn’t want to go too crazy.”

Now, after leaving the Welsh castle, Kadeena has once again been enjoying tasty dishes, including her first request – a fish finger sandwich.

Grilled by Lorraine on what food she had missed the most and couldn’t wait to sample again, Kadeena answered: “I am happy to have eaten and slept very well.”

She went on: “It’s the most random choice but I had a fish finger sandwich with some chips, and a brownie and a piece of cake.”

During the exclusive interview with Lorraine, Kadeena also opened up about how much she had enjoyed the experience from start to finish.

Reflecting on her time in the Castle and her early exit, she explained: “It’s obviously a shame to go out, I would have liked to have got to the end.”

Explaining that she would miss her “pals” after growing close to stars like Louise Minchin and Arlene Phillips, Kadeena went on: “I know it’s only six days but it’s so intense in there.”

“You create such amazing bonds and you just don’t want to leave. It’s such a fun experience that I feel sad to have left.”

For more I'm a Celeb gossip, sign up to our daily OK! newsletter. Lorraine continues weekdays on ITV from 9am