David Tennant stars as a vicar in over his head in the BBC’s brand new four-part drama from Sherlock scribe Steven Moffat. Although Inside Man’s first episode began with a promising start on Monday evening, many viewers were left baffled and annoyed by a series of far-fetched twists in the second half of the premiere.

Viewers found themselves turning over or switching off altogether during the first episode of Inside Man.

In the opening hour to the new thriller, vicar Harry Watling (played by David Tennant) is caught in a misunderstanding with maths tutor Janice Fife (Dolly Wells).

Over in the States, Stanley Tucci portrays a death row inmate, Jefferson Grieff, who occupies his sentence by solving cases he believes have “moral worth”.

However, it was Harry and Janice’s implausible scuffle over a harddrive that left much of the audience scratching their heads. 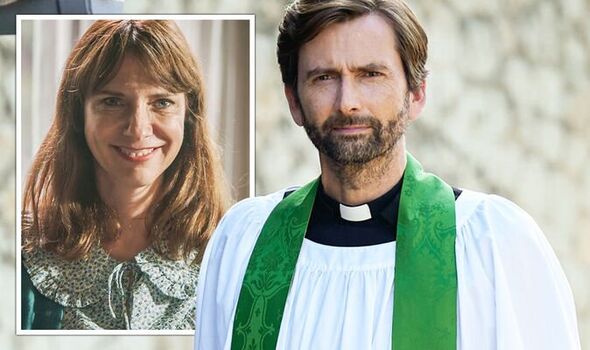 When Janice takes a look in the drive, she discovers it full of images of children being sexually abused, and wrongly assumes Harry’s son Ben (Louis Oliver) is behind them.

Instead, Harry was actually trying to protect a verger at his church from being traced to the images, though viewers were unsure why he would go to such lengths.

In the episode’s most divisive scene, Harry tries to stop Janice from leaving and inadvertently causes her to bump her head and fall down the stairs into his basement.

Taking to social media to share their thoughts on the first instalment, Annette Brook wrote: “#InsideMan was going well until the daft vicarage scene that had reality fly out the window and into the sunset. Shame as the Stanley Tucci bit was good.”

@FrChrisR said: “Thought #InsideMan would be a good watch with the cast and writer involved. But that scene in the vicarage was farcical.

“No reason to lie in the first place, and then just a ridiculous escalation. Death row scenes are better, hopefully the rest of the drama will catch up.”

“I am immediately rejecting the actions of the people in this programme,” Trish Byrne added. “I just don’t believe them. It’s too silly.”

@wurdskee tweeted: “Dear God #InsideMan on @BBC is absolutely awful rubbish. Who signed off on it? Sack them! C**p. Turned it off.”

@kilo1nine fumed: “Pathetic storyline. Why would any sane person act this way? #InsideMan. Switched off after 30 minutes.”

And @DrCJ_Houldcroft said: “First he ruined Dracula, now he’s managed to make an unwatchable drama despite a top-notch cast.

“I’m not sure why the Beeb indulge Steven Moffat. #InsideMan is ludicrous!”

Although Inside Man’s vicarage storyline clearly tested viewers’ patience, many of them were still intrigued by Stanley’s turn as the incarcerated crime-solver.

Kayleigh Lucas said: “Watching #InsideMan… it’s a little weird but I really want to know how the stories are linked.

“If the purpose of this episode was to draw you in and leave you wanting more… it has more than succeeded.”

There are still three episodes of the drama to go, with the first half coming to an end on Tuesday evening.

Fans who have given the series a chance beyond the first episode then have just under a week to go before Inside Man reaches its conclusion the following Monday and Tuesday.

Inside Man continues Tuesday at 9pm on BBC One.