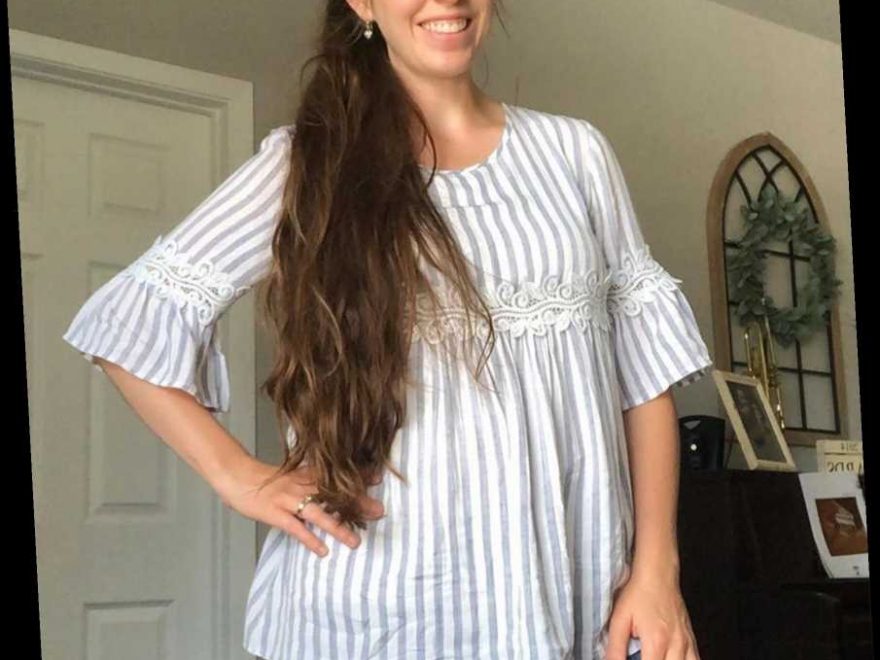 Jill (Duggar) Dillard is continuing to share personal revelations with her fans.

In a new Q&A video posted to YouTube on Wednesday morning, the former Counting On star sat down with her husband, Derick Dillard, for an open and honest conversation, during which Jill revealed that she uses a non-hormonal birth control.

″We’re more natural-minded and sometimes there can be more longer lasting effects from hormonal birth control and stuff like that so we just steer clear of those,″ she continued. ″Eventually we want to have more kids and stuff — lord willing — so we don’t want to mess too much with all of that and potentially cause problems.″ Her decision to practice the non-hormonal method of contraception may come as a surprise to some of her followers, many of whom first saw Jill on 19 Kids and Counting — the TLC series that documented the lives of Jim Bob and Michelle Duggar and their 19 children.

The show chronicled the lives of the conservative Arkansas parents, who enforced a modest dress code and specific rules for courtship for their children.

Following 19 Kids and Counting's cancellation, Jill and Derick, along with some of the Duggar family's older siblings, starred in the spinoff series Counting On, which the Dillards exited nearly three years ago.

In the time since, the couple has been open with fans about some of their surprising stances on topics considered taboo by her family, most recently the decision to drink alcohol.

Last week, the parents of two opened up in another Q&A video about a variety of decisions that Jill's made in recent years, including wearing pants, chopping off her long locks, getting a nose ring, participating in therapy and being open to getting a tattoo.

When it came to having the courage to make the personal changes she did, Jill revealed, ″I think, like, therapy's been really helpful.″

″But also, we haven't changed who we are as people. … As Christians, we want to have the Bible to be our standard. But I think like just growing as people and the whole 'leave and cleave' thing, which I know we've talked about before, has been helpful,″ said Jill.

She has also come to a place of ″being okay with other people not being okay, only to a certain degree. You don't just want to like not listen to anyone. But the people who are good role models to you, other fellow believers, people that are in your group, you want to listen to them, listen to their cautions, listen to that, get advice — wise advice.″

Jill also explained that ″you don't want to be overly fearful of other people too and be led by fear or a people-pleaser, which both of us kind of are there. So you have to grow as a person in that too, not just be a people-pleaser. But also learn the balance and show deference to people too. So I think it's about balance.″

Derick added that they ″feel like we have the freedom now to make more decisions that we might've otherwise before, but we're in a different place now where we actually can make those decisions. So like Jill was saying, we haven't changed as people. They're decisions we probably would have made before.″

She added that with ″more research, both sides, scripturally, like different things like that, I feel like maybe my views have changed a little bit. But as people, we still want to, as Christians, base everything on the Bible, so that part of us has not changed. But maybe our interpretations of some of it has.″

No matter their decision, their ″ultimate goal is still to glorify God in our actions, in everything that we do,″ said Jill, ″and our decisions that we make." The pair also disclosed that they want more children in the future — but perhaps not quite as large as Jill's was growing up.

″Yes, like Derick said, we would love more kids if God chooses to give us more. And secondly, how many? I don't know. I don't know that we have a number. Probably not 20 kids,″ said Jill.

Adopting a child is also a possibility that is near and dear to her and Derick's hearts.

″But again, we're not going to rule anything out. If God has us run an orphanage or something, then maybe we'd have more than that! I don't know,″ said Jill. ″So we'll see. Derick's mom was adopted, so adoption's always had like a place in our heart — a special place in our heart. But we'll see. We're not saying no, never or anything yet."