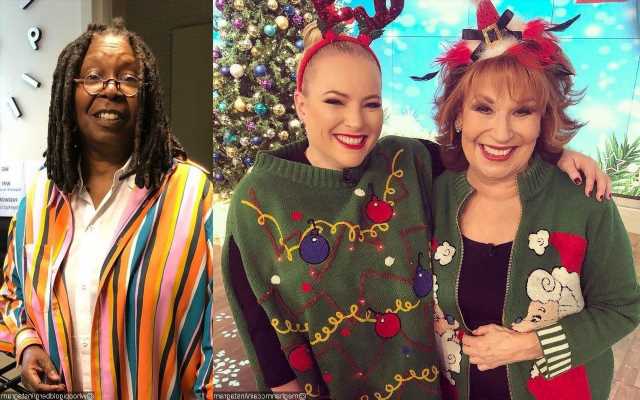 The clash between Meghan and Whoopi occurs after the daughter of late Senator John McCain yells at the latter for ‘cutting [her] off’ to go to a commercial break.

AceShowbiz –Joy Behar was upset at how Meghan McCain talked in the latest episode of “The View“. Finding her co-host ranting at Whoopi Goldberg while discussing anti-Semitism, the former host of “The Joy Behar Show” told the conservative panelist to “have some respect.”

“I’ve been talking about anti-Semitism on this show for 25 frickin’ years. Don’t tell me what I’m supposed to be saying, Meghan,” the 78-year old host first told the daughter of late Senator John McCain. “You do your thing, we’ll do ours.”

In response to Joy’s statement, Meghan replied, “I’m well aware we do separate things on this show, Joy, okay? And I know you’ve been here 25 years. I’ve been here four.” Joy then countered, “That’s right, that’s right. You should have some respect for that once in a blue moon.”

Prior to the heated argument, Meghan was discussing Marjorie Taylor Greene’s comments in which the latter compared House mask mandates to the Holocaust. “I can’t stand Marjorie Taylor Greene. I think she’s a crazy person. I’ve said that over and over again. But she has been stripped of her committees. She has absolutely no legislative power in Congress whatsoever,” she argued.

“Juxtaposed, when Ilhan Omar said that Jewish people had hypnotized the world and it was all about the Benjamins, she’s still on the Foreign Relations Committee, and she’s able to dictate our foreign policy in the United States of America, so what do you expect Republicans to do?” the 36-year-old added. “I think that’s taking a lot more action against a crazy person than I would say the Democrats are doing on the left.”

“If she is the face of the Republicans, then the ‘Squad’ is the face of the Democrats. I would love Democrats to put that same type of energy on to what’s happening on the left, because, quite frankly, this is how people get red-pilled,” she further explained. “They’re red-pilled when they see the blatant bias in the media, because the media doesn’t want the ‘Squad’ to look bad. They just want [Marjorie] to look bad.”

While Meghan had not finished sharing her thoughts, Whoopi tried to end the segment as she cited a commercial break. “We’re going to break and when we come back you can continue talking, but now we’re going to break, so we’ll be right back,” she said. Unhappy with the latter’s move, Meghan yelled, “Why are you cutting me off?!” The 65-year-old was quick to fire back by stating, “I’m cutting you off because we have to go, Meghan! Why do you think I’m cutting you off?”

After the break, Meghan continued her argument, demanding the media cover anti-Semitic hate crimes the same way “as we do with every other minority.” Her remark was met with major pushback from Whoopi and Joy. “Hey, we bring dislike for all hate crimes,” Whoopi stressed, before Joy added, “I resent that. I resent that remark.” Hitting back at the two, Meghan pointed out, “Well, I resent a lot of things, so we’re even.”