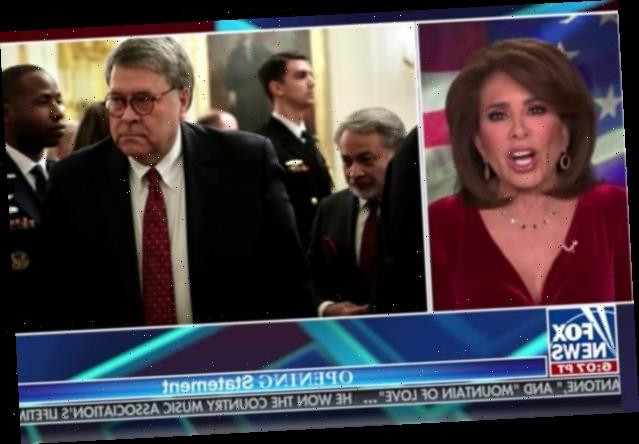 “Judge” Jeanine Pirro began her Fox News show Saturday night with an angry diatribe directed at pretty much everyone in the government media who isn’t actively pushing conspiracy theories claiming Donald Trump actually secretly won the election. And she even went after Attorney General Bill Barr, hinting that he is somehow a Biden supporter despite that fact that Barr has openly served Trump’s agenda until now.

This turn against Trump’s attorney general didn’t start with Judge Jeanine, of course. On Saturday, Trump endorsed a call to fire Barr immediately — some folks on the far right are bitter that Barr hasn’t pulled out every possible stop to overturn the will of the people by keeping Trump in office. Trump himself reportedly floated the idea of firing Barr this week.

“If you aren’t convinced there’s a deep state after witnessing the antics of the mainstream media, big tech and the Democrat Party, so determined to destroy President Trump and get him out of office, and prop up Joe Biden to get him into office, then come along with me,” Judge Jeanine yelled at to begin her “Justice” opening statement.

“They didn’t just steal the election from Donald Trump, they stole it from all of you. There was a fraud in their inducement of all things Biden in order to con you. They conned you, and they conned America. They wanted to win no matter what. Win at all costs. You didn’t matter. You never mattered, because it was never about you. It was about power. Their power. The kind of power the corrupts absolutely.”

Much of the rest of Judge Jeanine’s opener consisted of baseless conspiracies about Hunter Biden, and it was in the middle of all that that Pirro took her shot at Barr.

“Good old Bill Barr, the attorney general. The one so quick to point out that Joe Biden is not under a criminal investigation, against justice department guidelines, must have really had his hand on this one,” Judge Jeanine ranted.

“Because the candidate for president’s son under active criminal investigation from two years before an election is the kind of information that leaks out early and often. But we now know Bill Barr was the ultimate do-nothing deep stater, there to defend the status quo.”

Pirro’s bit about Barr quickly drew mockery from the left for all its absurdity, with folks like MSNBC’s Joy Reid chiming in.

You can watch Judge Jeanine’s screed about the Deep State, Hunter Biden and Bill Barr in the video embedded up above.