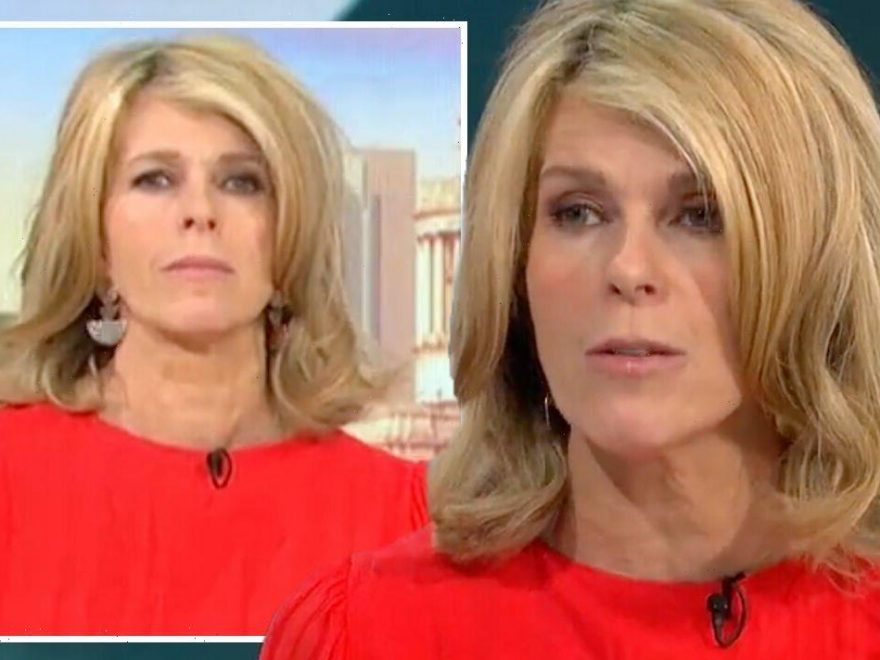 Kate Garraway and Ben Shephard were on hand to provide Good Morning Britain viewers with the latest goings-on regarding Thursday’s local elections. As such, ITV had reporters dotted all over the UK, all beaming into the studio to share with the presenting duo the latest news from their areas – particularly with Labour, the Lib Dems and Greens making a dent in Conservative strongholds. However, after Kate crossed over to the show’s reporter in Northern Ireland, things took a very awkward turn.

Kate had just cut over to Michelle Napier in Belfast to hear about the latest election news in Northern Ireland when the error occurred.

As Michelle delivered her rundown and analysis, Kate cut in midway through and began to move.

“Well, the big issue and unknown in this election is whether Sinn Fein will take the most seats this time around and become the largest party,” the ITV correspondent began.

She continued: “The polls are predicting that to happen and if it did, Michelle O’Neill will become the First Minister and for the first time, there’d be a nationalist First Minister in Northern Ireland. The question is -“

However, Kate cut in and spoke over her colleague: “Thank you very much indeed so -“

But it soon became clear Michelle hadn’t finished her monologue, although stopped herself when Kate interrupted.

Noticing the awkwardness, Kate tried to apologise for her interjection: “Apologies, apologies. I didn’t mean to cut you off, I thought you were complete.”

However, a slight time delay between the link meant a moment of silence descended in the studio before Michelle tried to continue: “I just wanted -“

But at this point, Kate decided to cut off the report altogether and move along with the show.

“Okay, we’re going to leave it there, thank you very much to all our correspondents,” Kate said as she and Ben swiftly moved on.

And the bizarre moment didn’t go unnoticed by viewers, and Twitter user @Suzanne09431552 was just one viewer to question Kate’s presenting style on Friday, asking: “@gmb what is going on with Kate today?

“Trying to follow the election stuff but I am so distracted by how often she is fluffing her words, cutting people off etc …ask Ben to step in for Pete’s sake!!”

Rick O’Shea saw the funny side as he poked fun: “LOOOL. Did anyone just see that s**tshow from #GMB host, Kate Garraway, and her correspondent in Belfast?!”

While Ken Chisolm joked: “Kate Garraway: ‘Sorry to cut you off there  ..but you should’ve known I do that all the time’ #GMB @GMB.”

Elsewhere, Lorna Macleod was irked by another part of Kate’s presenting style, tweeting: “@GMB please ask Kate not to whisper during reporters talking it is really annoying and distracting and not her usual professionalism.”

However, some fans were happy to see Kate back behind the GMB desk, as Wolf Ian added: “Not seen Kate and Ben presenting together for a long time. Great to have the A team back!!”