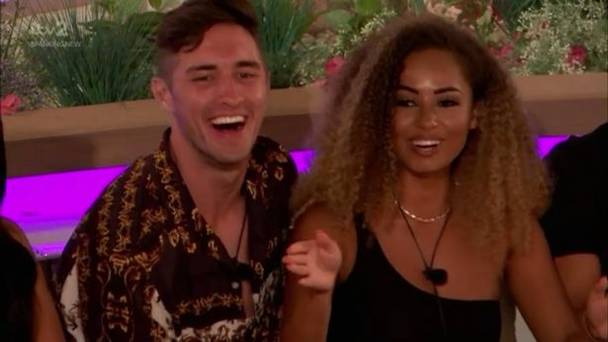 Anyone else watch tonight’s episode on mute, such was the level of smoochy smooches, nauseating song choices and general heaving – not aided by the incessant lurching of Amber and Greg’s boat?

Indeed, it was “final date” episode, which – joy of joys – takes place over two episodes.

In addition to Greg and Amber’s final date (AKA, their second date), we were also treated/subjected to Curtis and Maura making cow eyes from across the trestle table at dusk, while Ovie and India undressed each other with their peepers in the presence of extraneous fire performers.

Don’t worry, we’ll plough through this in a speedy fashion and get to the interesting bit for the keen bettors among you…

Was I the only person willing one of them to start vomming through the netting they were sat on? Just me. OK, their conversation went thusly…

Greg: “I’ve never had an instant connection with someone. It was so easy with you. I’m just delighted that I got to meet you.”

Amber: “I feel grateful that I stuck it out. Little did I know you were around the corner! This is the happiest I’ve been since I’ve been here…” We were then treated to Maura giving out shtink to the gerrals about Curtis not wanting to fulfil her “needs” last night, and dribbling about wanting to be doused in “sex sweat” (he wasn’t in the mood, what with the people leaving, the baby challenge, and he had a “headache” – all the usual stuff you say when you don’t want to have sex with your partner).

But back to Amber and Greg’s heaving date…

Amber: “I wouldn’t want to be on this date with anyone else.”

Greg: “Look at you, getting all soppy!”

Amber: “Doesn’t happen often so take it while you can!”

In short, they seemed genuinely lost in each other’s eyes. Just as well, because if they were concentrating on the horizon one of them definitely would’ve hurled.

They have had their ups and downs (or not, as it were). In short, she laid herself bare to him, said all the things someone in love would say (she even went so far as to say “MAMMY WOULD ABSOLUTELY LOVE YA”), Curtis didn’t reciprocate in kind to the same degree. OK, he said he was lost for words and raised a toast to her – before taking her hand for a few shteps, you know, to make the random harpist feel involved.

I dunno… whatever Curtis is selling, this hack isn’t entirely sold.

The pair looked sensational, every inch the power couple, sauntering into quite the fire hazard, resplendent with candles, small fires and fire twirlers. Their conversation went a little something like this…

Ovie: “Blah, blah, blah, really like you, can’t wait to see on the outside, I’m a very happy man, etc”

BOOM! Hey, at least they have the proper craic, easily ribbing each other, unlike others one could mention. THE FAVOURITES TO WIN

Amber & Greg are mostly likely to come third, Maura & Curtis in fourth, with living Ken-doll Anton and Belle bringing up the rear in fifth.

While this is what the bookies are saying, Twitter is saying something else entirely – and I concur. I don’t think viewers are feeling India as much as they’re digging our Greg.

• WTF was Molly-Mae doing doing a reverse plank across Tommy’s lap in the opening scene? Comfy…

• Ladies, yisser all going to regret dragging wet wipes across your faces in a decade’s time.

• THEY PLAYED THE CURE, LADS! Peppered between all the saccharine guitar solos, and unfortunate covers – actual MUSIC.

The heave-fest continues, with Tommy & Molly-Mae’s date, plus Belle & Anton’s date which will involve a “tub of Pringles on the sofa”