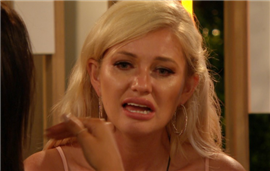 “Just say it. Just rip the bandaid off…” And Curtis couldn’t even do that for “acceptably average placeholder” Amy. But first, to Amber and Joanna’s awks spot of afternoon tea.

Sitting in silence for what seemed like an eternity, Joanna decided to kick things off with an ill-advised “I’m going to the bigger person”… After attempting to make Amber question herself (a tip picked up from Michael, no doubt) for not being receptive to an alleged “hello” from her, and the backlash from the “dead ting” comment, Amber put Joanna back in her box with… “It was a pretty s**t situation for me to walk in front of everybody by myself. To stand there and look at Michael coupled up with you. That wasn’t nice. It hurt my feelings a lot.”

Meanwhile, back at the ranch, Michael engaged in his preferred pastime of badmouthing Amber. Sitting with Anton, he seemed most concerned about Amber spilling poison into his new partner’s ear. Because that’s what Amber does according to Michael. He was fretting over Amber concocting a false narrative because – let’s face it – that’s what he did. Amber wouldn’t do that, though, Michael, she’s too mature. And she’s fierce articulate for someone so “childish.”

Amy’s made a list, she’s checked it twice, she’s gonna find out who’s been talking absolute SH***TE. Indeed, after a revealing chat with Jourdan, the latter filled in the glaring gaps between Curtis’s version of events and the actual truth. Last night, he wrapped it up in a bow of “but I chose you despite having this amazing connection” type ting.

What he failed to inform Amy is that he had two whole conversations with Jourdan, and that was enough to make him want to couple up with the blow in a whole four weeks after being with his “half-girlfriend”, his “exclusive partner.”

In short, Amy exposed him. He “is a compulsive lier.” And someone who’s weirdly concerned with everyone’s morning caffeine intake.

Listen, it’s not news that Anna is all over the shop since returning from Casa Amor with Ovie in tow and seeing that Jordan stayed single for her. Her vibe has changed somewhat, which has not gone unnoticed by the basketballer. Speaking on this very subject, he said “Since I’ve met you, we’ve just really got along. I feel like since you’ve got back and seen him, your whole energy changed.”

Understandably, Anna is confused – especially as she still doesn’t know Jordan also had his beady eye on Jourdan. In fact, he artfully dodged Anna’s “So, you don’t want to crack on with anyone else?” with “I wanted to prove you wrong and prove that I did like you. I don’t say things if I don’t mean it.”

In other triangulations; Tommy pulled Lucie for a chat just to see where their friendship is at and that gave Lucie the opportunity to say she’s still mad about him and should’ve chose him from the beginning. Twitter was not best pleased…

• Jordan saying “Is he bigger than me? Yes. Has he got a better trim than me? Yes. Will he slam dunk me? Yes, But he’s not me” was gold. But if Danny wasn’t there he’d deffo be off with Jourdan.

• Everyone now wants this to happen…

• George continued to make a huge impact in the villa… No wonder Lucie still has feelings for someone who has an actual personality.

Producers want us to believe Maura now fancies “bad boy” Curtis (well, he is technically a “bad” boy since he effectively told Amy he wanted a future with her, but only if she was OK with him trying it on with other people) WTAF, Maura?! You’re meant to be genuine!!!