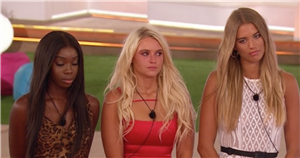 Love Island fans were reeling when Lucie stayed in the villa on Monday over fan favourite Yewande.

Yewande was ditched by her partner Danny as he instead opted to get to know new girl Arabella.

And since single Anton had already saved Lucie from going home, there was nobody left to save Yewande, meaning she was sent packing.

But watching the heartbreaking scenes unfold from their sofas, several viewers were reeling that Lucie decided to stay in the villa despite already having found Joe, who she had a connection with. Claiming it was unfair that Yewande wasn't given that chance, viewers took to Twitter in a rage.

While another added: "Why is Lucie even still in there if she found her half boyfriend apparently? Yewande really has been royally screwed over last few episodes, least she's away from Danny now #LoveIsland ".

A third chipped in: "I’m more angry at the fact Anton picked Lucie, she doesn’t deserve to be there. We all knew Danny was never picking Yewande. #loveisland ". As a fourth wrote: "Anton should’ve coupled up with Yewande and sent Lucie home. She had someone out there waiting for who she supposedly liked… #LoveIsland ".

Lucie was absolutely devastated last week when her partner Joe was chucked out the villa after they were branded one of the least compatible couples.

She initially contemplated leaving to be with Joe.

However, speaking to Anton before the recoupling she admitted that she would still be open to getting to know somebody if her perfect guy walked in.