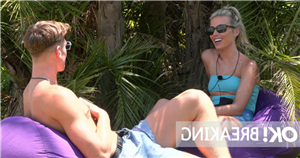 The first look at tonight's Love Island sees Will set his sights on Lana, after last night's re-couple left him single and at risk of being dumped from the island.

Speaking to Tom before getting his graft on Will says of his new coupling with Olivia: “Honestly, you are well better suited.”

Laughing, Will joked: "It just means that I’ve got to graft a little harder now.” Later in the Beach Hut Will adds: “[I’ve] got to do a lot of grafting, do a lot of talking and try to take in as much as possible.”

Newly single Will kicks off the following morning by grabbing Lana, who is currently coupled up with Ron, for a chat on the beanbags.

Elsewhere in the villa, Haris pulls Olivia to chat to find out where he stands now that she’s coupled up with newcomer Tom.

Haris says: “Out of every girl in here, you are the one that I’m most sexually attracted to, you’re a very good looking girl.”

Olivia tells him: “Looks wise I feel like he’s [Tom] growing on me but you’re more my type, I’m more physically attracted to you…

"And then personality, the thing that gets me so stuck is the fact that you’re both so different and I just need to decide what I want from a guy…"

Tonight's episode will also see the arrival of two new bombshells, and prior to their arrival two islanders will receive texts inviting them on dates with newcomers Zara and David.

The new arrivals are set to stir things up a bit, with one Islander admitting: “I think having the two new bombshells will definitely mix things up, it will get people sweating a bit.”

Prior to entering the villa, Essex local David said: "Listen, there’s only one David Salako. There we go. If you’re in a relationship with me it’ll be nothing but good fun, vibes. I think I’m alright looking as well…"

Similarly, Zara from London said: "I’m very loving to a fault, I am a Leo and people often think Leos are arrogant but we’re just very self-assured, we love ourselves but we have the same capacity to love other people."

Tanya and Shaq are seen to be getting closer in the first look as he tells her: "That was intense, something like that kind of puts things into perspective, in those kinds of situations you…"

Tanya asks: “You what?” to which Shaq replies: “I just want to keep you close…”

But with the new arrivals set to ruffle some feathers, anything could happen.