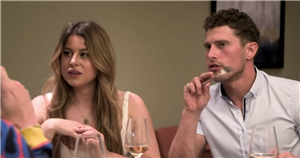 Married At First Sight’s Jonathan Wileman showed a different side to his personality during the show on Thursday 22 September.

Jonathan and wife Sophie Brown were discussing attending the gym when he left viewers cringing at his choice of words about women’s bodies.

The pair were joined at dinner by fellow married couple Thomas Hartley and Adrian Anderson when Jonathon discussed his views on women working out at the gym. He said: “I don't want someone who has got horse legs”.

He explained: "I never personally want a girl that's huge like body builder legs and a body builder body and someone that's really built up".

An unimpressed Sophie did try to stop him saying his thoughts and said he was being "patronising," but Jonathon explained he thinks he said it for her own "good".

He added that he "personally" doesn't like women with "horse legs", however Thomas shared his belief that Jon needs to be "more sensitive" to her feelings.

Viewers took to social media to share their outrage as one person shared: “And Jonathon slips slowly off the MAFS pedestal.”

“Jonathan is a strange one isn’t he? Gosh. He doesn’t get it…,” said a viewer with someone else penning: “Oh Jonathan, how disappointing”.

While Jonathan’s impression has certainly been changed in the eyes of viewers, he and his wife didn’t get off to the best start after their marriage.

There was some tension when Jonathan realised his wife likes the finer things on their honeymoon.

Jonathan told the camera: "I’d probably say she was more of a Waitrose or M&S, and I’m more of a Morrisons sort of guy, so hopefully we can come to some sort of compromise on that."

But Sophie said she felt calm and collected with her husband, and felt she could really open up to him.

"I don't think there are any immediate red flags that this isn't going to work," she said.

However, Sophie, who works in tech and lives in Manchester, asked Jonathan how he makes a living and she was left surprised.

When he told her he’s a joiner, Sophie’s face dropped before a pause and she then said: “Yeah, Ok.”

Later to the camera, Sophie said she was “taken aback because he’s not what I expected,” while remarking they are from “very different worlds”.