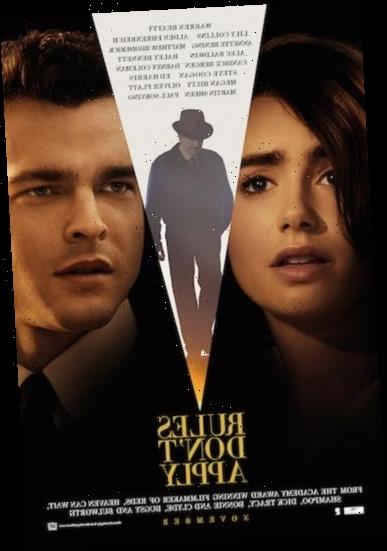 Forty years in the making, the movie landed with a thud. Domestic box-office sales appear to have been under $4 million. Back in 2016, moviegoers—still coming to terms with the Trump presidency— weren’t in the mood to hear about another eccentric billionaire.

But that title was work of genius, years ahead of its time.  Rules Don’t Apply. Who knew that Beatty’s picture, or at least its title, would set a theme for 2020, when the rules would pile up, but almost everyone would claim a personal exemption.

Coronavirus? California’s governor partied this month at Napa Valley’s French Laundry restaurant while prepping a fresh lockdown for 41 “purple” counties, including Napa, and reminding the rest of us to wear a mask between bites. Some California legislators went one better, flying to a conference on Maui while the state’s populace was being told not to travel. But why not? Rules don’t apply. Southern California sheriffs have said they won’t enforce the new curfew. But why should they? Everybody knows the rules just apply to somebody else. In Santa Monica and West Los Angeles, everyday people long ago figured out that tough mask regulations don’t apply to them. Friends stroll in clusters, half masked, half not. A rule that requires a mask when approached within two car-lengths by another pedestrian is only half-observed. In the grocery stores, almost every aisle has someone with his or her or their mandatory mask hanging below the nose. So the virus is surging. But who cares? The rules don’t apply. “I don’t have Covid, I’m with everybody every day!” explained one helpful clerk, as she hovered over this wary shopper at the self-check, about five feet short of the required six feet of social distance.

Would that it were only the pandemic. But the spirit of self-exemption has spilled into other matters, big and small. The election? One of my favorite Nov. 3 moments was a caught-on-video spat over access to a polling place in Philadelphia. An observer who wanted in invoked “the rules.” A woman who wanted him out snapped back: “That rule ain’t worth being followed.” A walk on the beach? Step carefully, the seashore has turned into a dog park, never mind a duly enacted ordinance and dozens of signs that clearly say ‘no dogs.’

Construction workers keep pounding after hours. Leaf-blowers, though forbidden here, are always blowing. Stop signs seem to have become optional. Turn signals are obsolete. Walgreens drugstores in San Francisco are closing because the shoplifting laws are unenforceable. Whether or when you’ll have to pay rent is unclear. Landlords are talking about mortgage default. Student loan obligations might not be an obligation any more.

So Rules Don’t Apply. Maybe Beatty—the guy who brought you those runaway rule-breakers in Bonnie And Clyde, way back in 1967–actually saw it coming.

He just got there a little too soon.