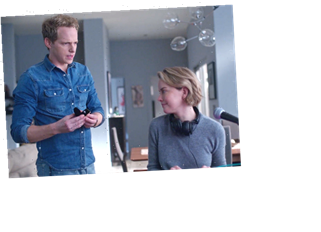 Settle in, A Million Little Things‘ Jamie: It looks like you’re going to be here for a while.

Thursday’s episode of the ensemble drama saw Chris Geere‘s character decide to stick around Boston until after Maggie completes her rescheduled cancer scans. Then, the roomies-with-benefits reasoned, they’ll return to Oxford together.

And that’s great and all, but choosing to stay in the commonwealth of Massachusetts longer than planned means there’s a greater chance for Maggie’s ex-boyfriend and her current hook-up to enter each other’s orbits… especially because Mags and Jamie are staying at Gary’s apartment while he and Darcy are at Delilah’s, and extra-especially because Maggie accidentally recorded and uploaded a private conversation with Jamie about her breakup with Gary, and more than a thousand people streamed it before she took it down.

Of course, we wanted the scoop on exactly what’s brewing between Maggie and Jamie, so we got on the phone with recurring guest star Chris Geere. But before we dive into that conversation, a quick overview of the episode’s other highlights: 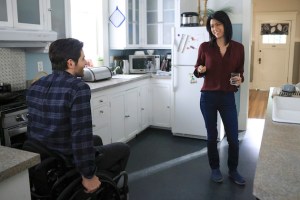 * Eddie was so high during a practice session with Dakota that he was unable to help Theo with his math homework. Dakota stepped in to assist the kid, but it was a bad moment for Ed. Then Katherine realized that the bottle of Eddie’s prescription painkillers was filled with aspirin, leading her to think that Dakota had stolen the drugs for her own use. To help Eddie save face/his marriage, Dakota lied and told Katherine that her suspicions were correct. Eddie had yet another chance to tell his wife about his struggle with the meds, but he didn’t. 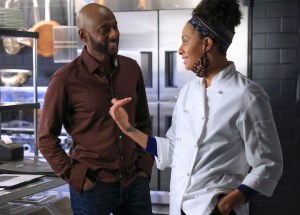 * After Regina started feeding Tyrell and his friends, Rome enlisted Shanice (and her extensive social media following) to get out the word that for every meal ordered, Someday would donate a meal to someone in need.  As soon as she made the video, business picked up, which meant that Regina didn’t have to start laying off her staff. 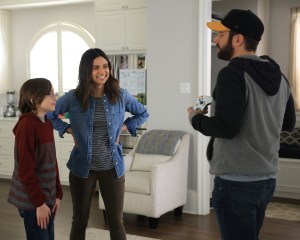 * Gary tried too hard to bond with Liam, Darcy’s son, but eventually found common ground as they commiserated over being freaked out by the coronavirus. Later, Darcy decided it was time to tell Gary the cause of her nightmares: When she was in Iraq, she accidentally shot and killed a child who was in the wrong place at the wrong time.

Now, without further ado, our conversation with Geere (with a little You’re the Worst love snuck in at the end).

TVLINE | What I find highly interesting about Jamie is he seems to be, at least as far as we’ve seen so far, absolutely a man of his word in saying that he’s not looking for strings and that what he and Maggie have is very casual. However… the man did fly across the Atlantic.
It’s quite a bold move, isn’t it, for someone who is not interested in pursuing it?

TVLINE | Exactly. So, he’s a bit of an enigma at this point. Talk to me a little bit about what you can say about how your character is feeling about Maggie by the end of the episode.
His heart’s in the right place, yet he personally is confused as to how he feels, and I think from landing in Boston and getting the reception that he got from her — we were talking before about how, I don’t know whether you could tell, but I was pretty nervous at the door when she opened the door to me. Because you don’t know how she’s going to respond, and you don’t want to travel 5,000 miles to get a bad reception.

His immediate priority is just to make sure that she was OK, because he’s aware of her situation. He doesn’t want her to feel any more alone. So, that is his agenda. He says right at the end of the episode that he came in to support her through the pregnancy situation, and now there’s no need for him really to be there anymore. I think it’s an opportunity for them now to look at what is happening within their friendship and relationship.

So, it enters into a new conversation, let’s say. But for now, he’s sticking to his word in that he wants her to be the best that she can be. He wants her to explore her own independence, and he’s there to support her through that. Now, I purposefully tried not to show his feelings towards her, but there are moments where you think that things could get a bit more serious, and that’s what will be fun to explore in future episodes.

TVLINE | Is he feeling any sort of way about Gary?
He’s aware of their history, but he’s trying to respect not only their past relationship, but also the fact that he’s living in [Gary’s] house as well, which is peculiar, even in quarantine circumstances. And yet there is a fun interaction between Gary and Jamie later on in the season that I think that the fans will hopefully enjoy. But I think his primary focus is the happiness of Maggie, so he can set aside any personal grievances with the ex.

TVLINE | Along those lines: We don’t see Gary becoming aware of the podcast in this episode, but I can’t imagine that’s a plotline that’s just going to get dropped. How might Gary react to the fact that Jamie was the one having that conversation with Maggie?
There’s a very strong possibility that he will find out, let’s put it that way. [Laughs] And when he does, there’s cause for this love triangle to blow up a little bit.

TVLINE | That friend group tends to absorb anyone in its path. Did you get to do any scenes with the group all together?
I wish I had, but unfortunately I didn’t. And that was simply through quarantine reasons.

TVLINE | The synopsis for Episode 9 says, “Maggie and Jamie are forced to address their relationship status.” What can you tease about what’s coming up on that one?
What can I tease is that he had an agenda at the beginning, and he wanted the best for her and he makes decisions based on that original wish. I personally said to [showrunner] DJ [Nash] right at the beginning, “I don’t want to, even if I become the disruptor, I don’t want to become the bad guy.” The story ends in quite a sweet and classy way. 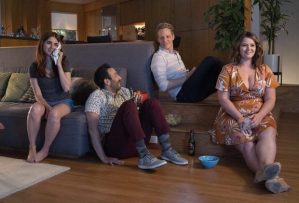 TVLINE | I was a big Worstie. I know you and your former You’re the Worst castmates recently had an online reunion. Talk to me about being with those folks and those characters after not having done so in a while.
I think the reunion was something that all of us needed, not only because of quarantine, but because we haven’t had an opportunity to work in an environment that was as close as ours. So, to see each other’s faces again was wonderful. I just had my 40th birthday this weekend, and we had a Zoom with the guys again where we watched the gag reel of the whole series. It was played to us on a large screen in a pub at the end of Season 5, at the wrap party, but obviously none of us were in the right state to really focus on it [then]. So, it was really fun to watch that again. You know, it will always be the job of a lifetime for all of us. I speak to Aya [Cash] on a weekly basis, and we’re all so supportive of each other’s next ventures, you know? It’s just, it will always be the one that sets the bar.

And you know, we’re not ruling out a movie. Why not? I think there’s a lot of the world that needs a bit of Jimmy and Gretchen in their life, and then they can go back and watch the show again, but you know, I’ve just, you know, if I’m feeling a little bit down or whatever, for whatever reason, I like to put on an episode and see what we all achieved in such a short space of time. It was incredible.