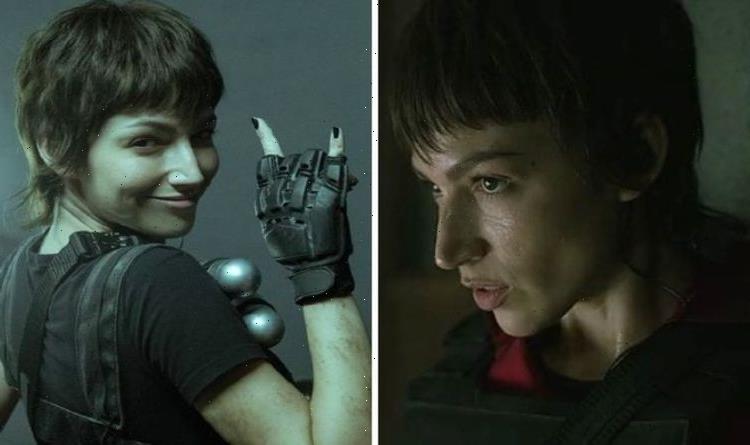 The first half of Money Heist’s fifth and final season concluded with a literal bang as Tokyo (played by Úrsula Corberó) resorted to desperate measures to take out the gang’s fiercest rival yet, Gandia (José Manuel Poga). However, some Netflix viewers have spotted a key clue which could hint to her miraculous recovery.

Tokyo could still be alive in the last five episodes of Money Heist despite her apparent death at the end of Part Five, Vol. One.

Fans devoured the latest additions to the series over the weekend, and came away with even more unanswered questions.

Their biggest point of debate was whether or not the series’ protagonist and narrator actually died in the blast she used to take out Gandia.

After getting pinned to the ground at gunpoint by the deadly mercenary, Tokyo winks at her captor and a powerful explosion sends shockwaves through the Bank of Spain.

Although the death itself wasn’t caught on camera, both her and Gandia’s bodies were presumably ripped to shreds in the resulting devastation.

Her apparent demise traumatised the rest of the crew, the sight of a weeping Rio (Miguel Herrán) the last thing we see before the credits rolled on the first half of season five.

Despite the all but definitive end to Tokyo’s story, the slightly ambiguous set-up of the final scene has already been discussed at length by some of Money Heist’s more skeptical fans.

Some of them are now convinced Tokyo will indeed be back to finish off the heist in Volume Two.

Moreover, narration from the character herself earlier in the episode also seems to confirm her survival.

Recent posts on Reddit have kicked off the debate, which is expected to rage on until the final five episodes bring an end to the theories in December.

User Repulsive-Mood8709 posted: “How come dead Tokyo said ‘The day I killed Gandia all odds were against me?’

“Since they both die together?? Just doesn’t make sense to me.”

A lot of fans have expressed confusion with Tokyo’s ability to narrate the series having been killed before the heist was completed.

For those who have been keeping up with the series from the beginning, it was widely assumed Tokyo would survive to recount the events some years later.

However, the unreliable narrator has pulled the rug from underneath the viewers, who aren’t happy when one of their favourite characters was blown sky high.

Redditor MrClassyYT also picked up the theory, posting: “If you guys focus on Tokyo’s words then you’ll understand quickly.

“She is not dead, even though we saw all the grenades explode.”

Once again, Tokyo’s narration seems to be providing a clue that not everything is as it seems during her final confrontation with Gandia.

Perhaps the sequence cut away just before she managed to make a hasty escape, or the explosion actually came from another source.

Only time, and the final episodes of Money Heist season five, will tell.

Money Heist Part 5, Volume 2 will be released on Friday, December 3 on Netflix.