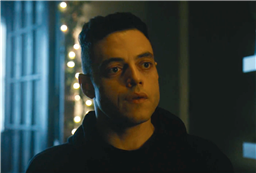 It’s been a long time since we’ve seen Mr. Robot‘s Elliot… but someone hasn’t forgotten what he’s done.

After more than a year and a half off the air, USA Network’s Emmy-winning crypto thriller returns this fall for its fourth and final season, and we now have our first look at how this twisty conspiracy tale will wrap up. In a newly released sneak peek — which you can watch above — Elliot (hey, congrats on the Oscar, Rami Malek!) sits silently while an unseen woman hammers him with a tough interrogation.

“I wonder how many people you’ve had to hurt to get what you want,” she says while Elliot squirms in his seat. “How many has it been, Elliot? How many people have had to suffer because of you?” Only when she asks him, “Was it worth it?” does Elliot finally glance up and look her in the eye. (I don’t think the woman speaking sounds like Angela, Darlene or FBI agent Dom… a new cast addition, perhaps?)

In case you forgot (it’s been a while): Last season ended with Elliot recovering all the lost E Corp data and effectively reversing the Five/Nine hack. Season 4 “will take place over the 2015 Christmas holiday and will be filled with hacking, splashed with blood and answer the series’ most pressing questions,” the official description promises.