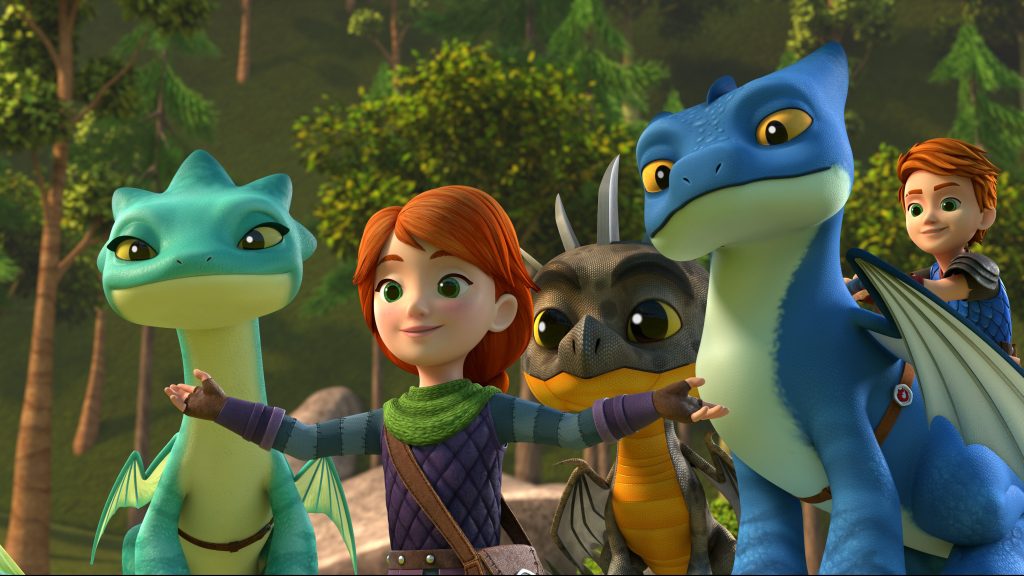 Netflix on Monday unveiled seven new original preschool series in the works at the streaming company, including a CG animated comedy adventure to premiere this year that serves as an expansion of DreamWorks Animation’s How To Train Your Dragon franchise.

They will join current series in the space like Ask the StoryBots, Chip and Potato, Mighty Little Bheem, Motown Magic, Super Monsters, True and the Rainbow Kingdom, Word Party and YooHoo to the Rescue. The content is available on Netflix Kids, a portal that gives adults the ability to prevent access to certain content on their account via age restrictions and PINs.

“With high-quality, age-appropriate programming for kids at every age and stage, we want to help young people find and connect with the stories and characters they love on Netflix,” said Melissa Cobb, VP Original Animation at Netflix. “We are also here to empower parents to find the shows that are just right for their families during whatever time they feel is appropriate to enjoy entertainment.”

DreamWorks Dragons Rescue Riders (2019) is a CG animated comedy adventure series that opens a brand new chapter in DreamWorks Animation’s Academy Award-nominated and Golden Globe-winning How to Train Your Dragon franchise. The all-new series is about twins, Dak and Leyla, who because they were raised by dragons, share a unique ability to communicate with them. The brother and sister lead a team of five young dragons that spend their days rescuing other dragons, and helping the people in their adopted town of Huttsgalor.

Hello Ninja (2019) For Wesley and his best friend Georgie, every day is an adventure. When Wesley puts his hands together, bows to his reflection and says the words, “Hello, Ninja” his surroundings instantly transform into an enchanting Ninja world. From Atomic Cartoons, a Thunderbird Company, this CG animated series is based on the picture book of the same name from author N.D. Wilson.

StarBeam (2020) Zoey is excited to tackle second grade, but when danger beckons, she sneaks away and – with her signature call out “It’s time to shine!” – transforms into StarBeam, the speediest, most powerful and most enthusiastic superhero to ever sip from a juicebox. StarBeam is a CG animated series produced by Kickstart Entertainment.

DreamWorks Go, Dog. Go! (2020) is a CG animated series produced by DreamWorks Animation and DHX Media, based on the beloved, classic children’s book by P. D. Eastman, published by Random House Children’s Books. Every dog wants to go! Go fast, go far, go to a big dog party in a tree. The series follows young pup Tag Barker and her adventures in Pawston, a colorful community of dogs on the go.

What-To-Doodles (2020) A team of adventurous and lovable young creatures play, grow, laugh, learn, and sing together in this CG animated series that teaches young viewers “what to do” in everyday social experiences and firsts. Created by Art Spigel and Hannah Kole, the series is produced by creative production company 7ate9 Entertainment.

Izzy Bee’s Koala World (2020) 11-year old Izzy Bee, known affectionately as the Koala Whisperer, lives on Australia’s Magnetic Island where she rescues and rehabilitates koalas with her veterinarian Mom, Ali and her dad, Tim. This non-fiction series is produced in partnership with The Dodo and Nomadica Films.

Emily’s Wonder Lab (2020) Discover what makes STEAM fun with these visual demonstrations that will blow your mind! Acclaimed science communicator Emily Calandrelli takes kids through lively experiments and entertaining activities in this new live-action series created and produced by Bunim Murray Productions (The Real World, Crystal Maze, Keeping up with the Kardashians).