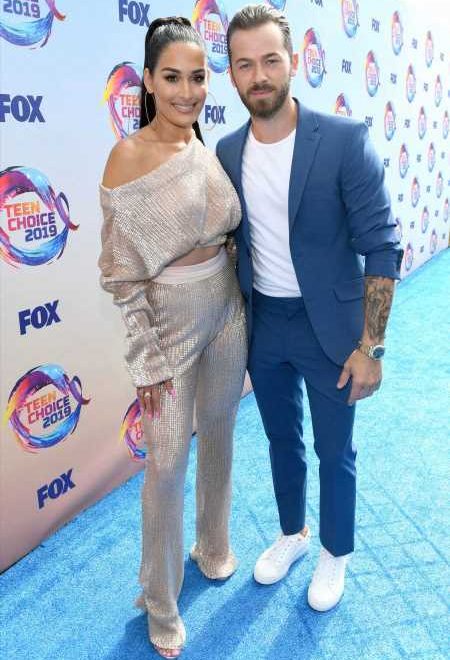 Nikki Bella is giving her fans an inside look at her relationship with Artem Chigvintsev.

The Dancing with the Stars pro will appear on the upcoming season of Bella’s reality show, Total Bellas. The couple started filming over the weekend, and Bella marked the occasion with a touching Instagram post.

“Today is a new beginning for both @theartemc and I,” Bella wrote to announce the news. “As I start a new amazing journey with @totalbellas and my life, my @theartemc is starting the same. And I am so excited for him to be on this journey with me. I’m thankful for him to showcase his life, love, ups and downs not only for me but for my Bella Army and my Total Bellas viewers.”

After a difficult year following her public split from John Cena (which was chronicled on the series), Bella said she’s excited for the next chapter of her life.

“Sometimes we have a door shut and we don’t understand why, but honestly there is always a reason. I have been through that. And not through that just as a break up but through that professionally and personally. And when those other doors open they open SO big!” she wrote. “Believe in God, the Universe, our Angels and so much greater beyond what we can see. Believe that happiness lies beyond dollar signs. As long as we have each other, health, happiness and love they can’t cheat us, use us or cause us harm. I love you all! I love your support! Your follow! Your positivity! And thank you for sharing it with someone who means SO much to me.”

Along with the touching message, Bella shared a photo of the couple embracing while standing on the edge of a cliff.

And Chigvintsev posted his own tribute to Bella over the weekend, calling the pro wrestler his “soulmate.”

“You are my rock, my number one, the good ending to a bad day and the best start to a new day, you are my soul mate,” he captioned a photo of the two posing on a red carpet together.

Bella and Chigvintsev met when they were partnered on Dancing with the Stars in 2017 and reconnected after her breakup. They made their relationship official last month after dating with “no labels” for nearly four months.

“We’re boyfriend and girlfriend,” Bella, 35, revealed on The Bellas Podcast on Wednesday.

“We’re in a relationship,” he added.

Bella has said she feels a sense of “freedom” now that her relationship is so solid.

“It feels so good and I don’t have to hide it. I’m such a grabby person, like so PDA,” she told PEOPLE. “And there’d be times I would just want to grab him so much and then I’m like, ‘Oh shoot, I got to pretend like I don’t know you.’ “

“But it’s fun,” she added. “It’s nice because now it’s like having freedom. We could do whatever we want and it’s all good.”