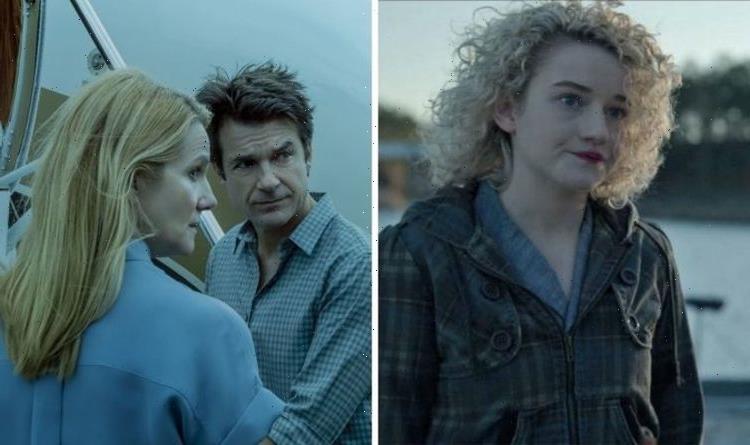 Since season three came to an end in March 2020 fans have been patiently waiting for the impending instalment especially after the explosive cliff-hanger. Many of the Netflix streamers have taken to re-watching Ozark and have spotted a major clue, which could see Ruth Langmore (played Julia Garner) betraying the money laundering couple.

Speaking of Ruth the user wrote: I really hope they’re setting her up to be a double agent or at least a fake defector, seems more likely considering she didn’t warn Byrdes about Helen’s plans.

“I get that she’s a complete and utter emotional mess right now, but she has to be smart enough to know that Darlene is just planning on using her and is manipulating her, especially since she just left Byrdes because of this,” the fan explained.

In season three Ruth finally walked away from the Byrdes after they refused to kill Frank Jr (Joseph Sikora) to protect Ben Davis (Tom Pelphrey).

Fans will remember in season one Ruth had been working with Wendy and Marty to launder money across the Ozarks.

The patriarch had moved his family to the Missouri Ozark from Chicago after a money-laundering deal went wrong.

In order to keep his life, Marty was forced to wash $800 million in under five years, so he hired Ruth to help.

After considering the Ozark as a safe and less competitive location, he purchased a strip club and a funeral home which he intended to use as a front for his illegal dealings.

He later realised those businesses wouldn’t cut it so he founded a riverboat casino which he stated would also bring tourism to the town.

Throughout all his ventures, Ruth stuck beside him and used her contacts as a local resident to ensure he would get the money laundered.

However, in season three things took a turn for the worse when Wendy’s brother Ben, went to visit.

He was introduced as a teacher on the run and needed a place to lie low, after he settled in the Bryde household he met Ruth and the two fell in love.

In an effort to consummate their relationship, Ben stopped taking his bipolar medication which caused him to lose his mind.

After learning his family were involved with the Mexican Cartel he went on a rampage and began exposing the secrets, which resulted in them wanting him dead.

Wendy tried to go on the run with her brother but when she realised how far gone he was she made the call that ended his life.

Refusing to kill Frank Jr also put Ruth in danger as he brutally beat her, sending her to the hospital.

This series of betrayals led her to cut ties with the Byrde family and work with their rival Darlene Snare (Lisa Emery), who shot Frank in the groin after learning what he did to Ruth.

Ruth’s cousin Wyatt Langmore (Charlie Tahan) was also in a relationship with Darlene, so she felt close to home with them.

With her insight on all of the Byrde’s illegal dealings, Ruth could get revenge on them by giving them up to the police.

Fans will have to tune into season four to see how she will get revenge and whether or not this theory will come true.

All episodes of Ozark are available to stream on Netflix.