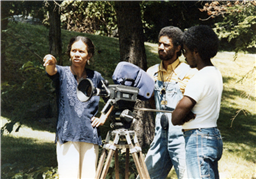 “Kathleen Collins lived an inspirational life itself worthy of a film. She fought for civil rights, then fought for the opportunity to tell powerful stories about people of color,” said Jeffrey Sharp, executive director of the Gotham Film and Media Institute. “She is an expert and nuanced storyteller who overcame a variety of systematic obstacles in order to tell stories that challenged stereotypes and featured nuanced depictions of marginalized communities. It is an honor to recognize this talented and dedicated individual who never got the appreciation she deserved.”

The Gotham Icon Tribute was conceived by the Gotham Awards Advisory Committee this year on its 31st anniversary to call attention to the boldness, artistry and impact of a filmmaker from a marginalized community whose work has not been previously recognized by the organization.

Collins was an activist with the Student Nonviolent Coordinating Committee (SNCC) during the Civil Rights Movement, and went on to carve out a career for herself as a playwright and filmmaker during a time when Black women were rarely seen in those roles. Her most known work is the film “Losing Ground,” followed by two plays, “In the Midnight Hour” and “The Brothers.”

As one of the first Black American women to produce a feature-length film, she is considered to have changed the face and content of Black womanist films by challenging stereotypes and explored the interlocking oppressions of gender, race and class.

As previously announced, Kristen Stewart will receive a Performer Tribute, Eamonn Bowles the Industry Tribute, the cast of “The Harder They Fall” will receive the Ensemble Tribute and Jane Campion will be honored with the Director’s Tribute.