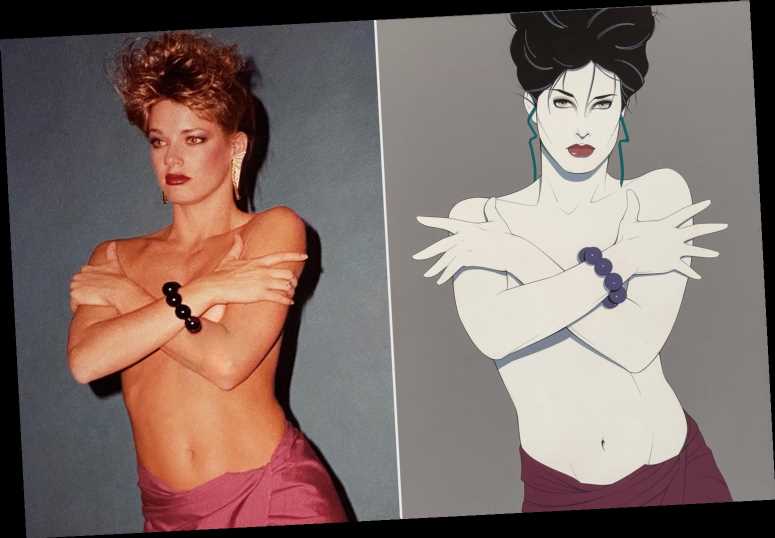 A topless portrait of Real Housewives of Orange County star Jeana Keough has sold at an auction for $350,000.

On Oct. 16, Jeana, 65, announced that a painting of herself by artist and illustrator Patrick Nagel, titled Jeana, 1983, was up for auction after being hung in her bedroom for 30 years.

"This Patrick Nagel of myself has hung in my bedroom 30 years today," she captioned an Instagram photo of the art piece. "In an hour it’s being sold at live.ha.com live auction at heritage auctions lot 8027 bring your a game!"

As to why she decided to part with the image, the mother of three added in the comments that "it’s something the kids don’t care about. I have more."

The portrait features Jeana crossing her arms and covering her breasts while wearing earrings, a bracelet on one of her wrists and a purple fabric around her lower waist — nearly identical to a model shot of her that was captured when she was 27 years old.

That same day, following her announcement that the auction would be taking place, the portrait — which is 40 x 25 in., acrylic on canvas and signed and dated on the lower right — sold for a record-breaking $350,000 after it sparked a bidding war and shattered the previous artist auction record, according to Heritage Auctions.

"It has hung in my bedroom and my best friend wanted it and I almost gave it to him because my kids had no interest in it," Jeana tells PEOPLE. "Haha, glad I didn’t!" Ed Jaster, vice president of Fine Art at Heritage Auctions, said in a statement: "We could hardly believe our eyes as the bids came in so fast and so strong."

Three years ago, the auction house set the previous auction record paid for a Patrick Nagel portrait in 2017 when it sold Bold for $200,000.

Prior to her time on RHOC, Jeana (née Tomasino) was an elite model who was named the November 1980 Playboy Playmate of the Month. Jeana and the 11 other 1980 Playmates caught Nagel's eye, according to Heritage Auction, and he began making large acrylic portraits of each of the women.

Following Nagel's death in 1984, Jeana received a call from the late artist's wife. "I wanted this pose. My boyfriend at the time wanted a (portrait with a) similar pose in a swimsuit, but it wasn't signed," she said.

Although the portrait sold for a large number, Jeana said she would miss owning it.

"I'm moving – downsizing – and I don't want my kids to have to deal with it," the former Bravo personality, who listed her Orange County mansion for $2.9 million last year, told Heritage Auction. "I have other photos and pieces of art, but this one hung in my bedroom. I'm going to miss it."

The sale comes after a difficult year for Jeana and her family.

In April, Jeana's daughter Kara Keough announced that her newborn son had tragically died after experiencing "shoulder dystocia and a compressed umbilical cord" during the course of his birth. Kara gave birth to McCoy on April 6 at 3:10 a.m., she said, her son "weighing in at 11 lbs. and 4 oz., and spanning 21 inches."

Nearly a month later, Jeana's ex-husband Matt Keough — with whom she shares Kara, 32, and sons Shane, 33, and Colton, 28 — died on May 2 from "a pulmonary embolism" in his lungs, the RHOC alumna told HollywoodLife. He was 64.

"You know what, to lose a grandchild and an ex husband in less than three weeks — it's been rough," Jeana told the outlet.

As her family continues to both mourn and heal, Jeana is looking forward to spending more time with her loved ones. "I bought a house in Florida to be near my granddaughter," Jeana tells PEOPLE and adds that she has "identified McCoy’s Warriors March of Dimes as my charity — that’s my grandson that passed away six days after his birth."

And while parting ways with the portrait was bittersweet, Jeana had her family in mind when she made the decision.

"I felt selling it was the best option as the kids would rather have a boat!" she tells PEOPLE. Plus, "I got a present a week after from the girl who bought it — she sent me a copy of it, so I will still have it hanging in my house!"