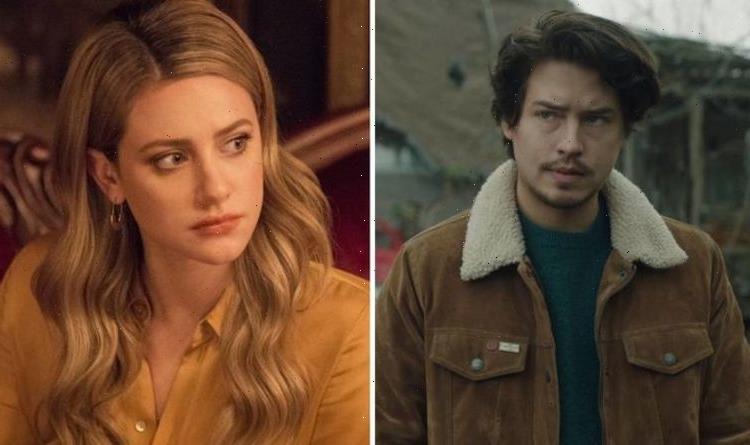 Riverdale season five went on a four-month break, the longest hiatus in the Netflix and The CW show’s history. But it was definitely worth the wait as the season continues to see what the gang gets up to now they have all reconvened in the suburban town, seven years after leaving Riverdale High. However, a lot has happened during this time jump which will gradually be explained as the series goes on.

What did Jughead say in ‘toxic’ voicemail to Betty?

Prior to the time jump, Jughead Jones (played by Cole Sprouse) and Betty Cooper (Lili Reinhart) had quietly broken up.

They didn’t talk about going their separate ways but after Betty kissed Archie Andrews (KJ Apa), things were never the same.

From the sounds of it, Jughead and Betty did stay in touch during this period up until two years ago.

The last time Betty heard from her ex-boyfriend before venturing back to Riverdale, was on the night of his book launch.

Betty apparently agreed to go to the special event after being invited to do so by Jughead.

For some unknown reason which hasn’t yet been revealed, Betty didn’t show up.

She had mentioned receiving a voicemail that same evening but its contents hadn’t been disclosed.

That was until season five’s episode 11, Strange Bedfellows, when she played it for Tabitha Tate (Erinn Westbrook) and Jughead’s other ex-girlfriend Jessica (Phoebe Miu) to hear.

With her phone on speakerphone, Jughead could be heard saying: “Betty, where the hell are you?

“You said you were going to come to my release party, but you bailed? Of course you bailed.

“You’ve just been blowing me off for years. Why should you even expect anything different?

“You know, I see you, Betty, I see what I should have seen seven years ago.

“You pretend to be nice, but you’re only looking for weak spots.

“And when you find them, you press on them like a bruise.

“Like when you hooked up with Archie. You know you found the one person who would hurt both me and Veronica, and you just went there.

“You’re a cold, fake, duplicitous bitch, and once people read my book, everyone is going to see that.”

So far, it hasn’t been revealed what actually led to Jughead leaving Betty this message.

But showrunner Roberto Aguirre-Sacasa told Variety that all of this will be explained in this series.

He said: “A lot of his [Jughead’s] season’s story has been about slowly coming to terms with the events of those seven years [that the show jumped ahead] — the trauma that he experienced and survived, that led to him [to] hitting rock bottom [and which] led to him leaving that toxic voicemail for Betty.

“We will see [the origin of it] in an episode — the events that led to him leaving the message; we will see him actually leaving that message.

“So, my hope is that we’ll come to understand where Jughead was at that point in his life that he left it.

“But it does feel like it’s sort of a ‘past the point of no return’ voice message.”

In next week’s episode which will air on Wednesday, August 18, on The CW, and Netflix the day after, fans will get to find out more about another character.

The episode will be entitled Citizen Lodge and the synopsis for the show reads: “Hiram shares with Reggie his origin story and how he went from a young Jaime Luna to the powerful kingpin of Riverdale.

“Reggie reflects on his relationship with his father.”

Riverdale is available to watch on The CW and Netflix.