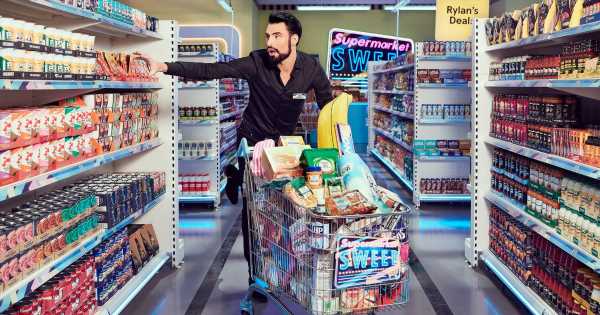 Rylan Clark Neal has opened up about a lovely new detail about his Supermarket that will be included in the reboot.

The 30-year-old will be taking over from the late Dale Winton to present the reboot of the iconic 90s show.

After revealing that he had always watched the original after getting back from school when he was younger, he spoke about the changes they had made to the new show.

This time, the supermarket is stocked up with real food – but it doesn't go to waste.

"One thing that is amazing, which I want to make sure people know, is that every day we donate the food to food banks," Rylan told This Morning hosts Eamonn Holmes and Ruth Langsford.

"So for TV purposes we want everything looking pristine, but there's still three, four, five weeks on that fresh produce that is all great, so we donate."

Eamonn exclaimed that he was shocked at the food being fresh and couldn't help "squeezing the bread".

This comes after ITV teased a first look at the new show, during which Rylan tells viewers in the trailer: "ITV2 are reopening the supermarket like no other. Check it out."

Contestants are then seen speeding down the aisles as they frantically pick items from the shelves.

One contestant is so chaotic that they end up throwing plastic boxes full of grapes on the floor, leaving Rylan utterly gobsmacked.

Other clips show contestants banging their trolleys into aisles, prompting a cascade of food to fall down on the floor.

The trailer had first aired on Lorraine this morning, with host Christine Lampard saying: "Best of luck, Rylan!"

The original series ran from 6 September 1993 to 6 September 2001 and was hosted by Dale Winton. It was revived again on February until 31 August 2007.

10 years after the show stopped airing on TV, it was announced that FreemantleMedia had managed to acquire the rights to the show and were bringing the series back on TV.

On July 9 2019, it was confirmed that Rylan would be hosting the revival this year on ITV2.

Rylan previously said that he was "gutted" not to get Dale's blessing before hosting the show.

He told The Sun: "The most gutting thing when Dale died was I never had the opportunity to ask him about it."

However the reboot will include a nod to Dale following his death last year.

He told Radio Times : "That was one of the big things when I agreed to do the job – that I wanted to have a nod to Dale somewhere in the supermarket, which we’ve managed.

"That’s all I’m going to say about it, but it was the one thing I really wanted."

*This Morning airs weekdays at 10.30am on ITV