It’s not evident right away why “Sasquatch” is split into three parts. Given the overall draw for the new Hulu series — the search for answers behind an early-‘90s triple homicide that may or may not have been perpetrated by a legendary cryptozoological figure — there doesn’t seem to be baked-in episodic cutoff points within that premise.

One of the strengths of director Joshua Rofé is how far afield of that central myth it’s willing to travel at various points. What begins as one intrepid journalist’s hunt for answers behind an overheard anecdote that’s lingered for nearly 30 years stretches to fit parts of the greater web surrounding that search. Yet, like so many other true crime-adjacent projects in recent memory, “Sasquatch” shrugs off its most fascinating context for a single thread, one that leaves the audience in as much of an ambling haze as its main surrogate.

At least at the outset, “Sasquatch” delivers on the promise of its title. While not a comprehensive overview of Bigfoot obsessives — Animal Planet started trying to corner that market a little under 10 years ago — the series does provide a mixture of amateur sleuths, true believers, and the allure of academic approaches. Like any other popular theory without widespread corroboration, it’s a recipe for a logic spiral that “Sasquatch” is adept at acknowledging without falling into.

Instead, it redirects much of that energy toward writer and journalist David Holthouse. Through him, the series tracks the possible veracity of a claim that Holthouse heard outside a cabin in the forests of Northern California in the early 1990s: that Bigfoot was responsible for a gruesome killing that left three dead in one of the region’s many pot fields. Convinced that there might be some truth to an impossible set of circumstances, Holthouse sets out to track down anyone who might have firsthand knowledge about what really happened the night in question.

By the time it arrives at its middle act, “Sasquatch” has put upright-walking forest beasts largely on hold and shifted its focus to the other key pillar of Holthouse’s story. To give a better understanding of the complex evolution of marijuana farming in the area, “Sasquatch” dives into a half century of passion, policy, and policing that has given the region an identity, a cash crop, and (as the series argues) a hotbed for dangerous activity. Talking to growers who were present during Drug War-era crackdowns and raids, Rofé finds a way to weave ideas of prosecutorial hypocrisy and state overreach into the existing fabric of fascination with the inexplicable.

It’s a balancing act that largely gets thrown off by the Holthouse story. While an intriguing hook for the series, it’s a rocky process of separating truth and history from gossip and score-settling. (Rarely is an over-the-shoulder glimpse of a documentary subject googling a key piece of information a sign that narrative real estate is being used most efficiently.) Holthouse is an engaging storyteller and the series’ many animated recreation sequences effectively transport you into his investigative headspace. But when so much of his pursuit is one-sided phone calls and pixellated conversations, there’s only so much that “Sasquatch” can do before the drama seems manufactured.

This overriding focus on a single individual made sense in Rofé’s previous project, the fascinating Amazon Prime Video series “Lorena.” In covering the wide swath of myths behind the salacious Lorena Bobbitt tabloid headlines, Rofé was able to present an emblematic case of the media machinery that tends to grind up women who find themselves in the public eye. Comparatively, Holthouse gives “Sasquatch” a quest narrative that often distracts from the more informative, more compelling context for his search that Bigfoot enthusiasts, marijuana growers, and former law enforcement officials are able to provide.

Following Holthouse through the various breaks in the case turns out to be both a blessing and a curse. Through some stretches, there’s the immediacy of seeing someone confronted with a real, unexpected threat as he gets closer to one particular version of the truth. “Sasquatch” also features more than one individual being forced to confront the slipperiness of their own perception and memory. But in showing what becomes a switchback path to an enigmatic endpoint, there are plenty of repetitive recaps and dead ends along the way. It’s hard to make the case that the resulting mesh of cliffhangers and accusations is more compelling than if Holthouse would have been just another of the series’ collection of contributors. Presenting his ultimate findings in the same manner that those in the Patterson-Gimlin saga do may well have contributed the same amount to the series’ overall thematic conclusions.

There’s a final layer that gets more of the series’ attention as it arrives at its ending minutes. Without describing what it is and how it ties into Holthouse’s ultimate conclusions, it’s introduced in a way that’s less thorough and connected than the surrounding topics of the show’s first two episodes. It’s an emotional story, and one with consequence. It also hints at a different version of “Sasquatch” that’s less preoccupied with the elusive and manages to find something even more profound in the tangible reality surrounding an ever-growing, fantastical idea.

“Sasquatch” is now available to stream on Hulu. 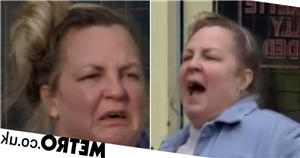